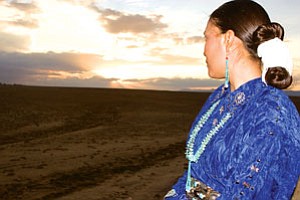 FLAGSTAFF-The 4th Annual Southwest Native American Film Festival will be held at the Museum of Northern Arizona (MNA) and the Coconino Center for the Arts (CCA), Oct. 5 and 6. The film festival is a unique showcase of contemporary Native American video, film and animation made by Indigenous filmmakers from throughout the Southwest.

This year's festival will feature 25 films, including a special screening of the festival's feature film "Mile Post 398," with director Shonie De La Rosa and members of the cast and crew. Additional festival highlights include "Crazy INDN," a unique short animation set in the future with a superhero who seeks to reclaim the skull of Geronimo. Director Ian Skorodin will be on hand to talk about making "Crazy INDN."

"Horse You See" by Melissa Henry is a story that explains the very essence of being a horse in the Navajo language. Finally, "Miss Navajo," the festival's feature documentary, explores the extraordinary beauty pageant. Eight youth shorts are also included.

This year's festival will also offer a professional development opportunity with renowned Native American composer Brent Michael Davids, who will present a workshop on film scoring for filmmakers.

The festival, presented in partnership by Indigenous Action Media, MNA, Flagstaff Cultural Partners, Tacoho Productions, Native Movement and Outta Your Backpack Media, seeks to provide an opportunity for audiences of all ages to further their understanding of Indigenous cultures today.

Screenings will be held at the MNA's Branigar Hall and the CCA.

Weekend festival passes that include admission to receptions with filmmakers on both Friday and Saturday nights can be purchased in advance for $18 ($14 for students). General and student admission fees will be collected at the door. Passes can be purchased at Winter Sun Trading Co., MNA and CCA.

Call (928) 779-2300 for additional information or visit these festival partner websites for a schedule of events at www.indigenousaction.org, www.musnaz.org, and www.culturalpartners.org.

7-9:30 p.m. Evening Screenings at the Museum of Northern Arizona

9:45-11 p.m. Reception at the Coconino Center for the Arts with filmmakers (open to weekend pass holders)

10 a.m.-1 p.m. Film Scoring for Film Makers Workshop at the Coconino Center for the Arts (register at www.indigenousaction.org)

2-4:30 p.m. Presentation of Short Films at the Coconino Center for the Arts

5-6 p.m. Meet the Filmmakers at the Museum of Northern Arizona.

6-9:30 p.m. Evening Screenings at the Museum of Northern Arizona

Evening Screenings at the Museum of Northern Arizona

A short film about a graphic artist trying to collect his pay from the Navajo Nation's Washington, D.C. office.

In this unique animation set in the future, the superhero Crazy Indn seeks to reclaim the skull of Geronimo, with implications all the way to the

The Border Crossed Us

Since time immemorial, the Tohono O'odham have crossed borders freely between their communities in the U.S. and Mexico. This work examines the ways in which current immigration and naturalization policy are putting their way of life at risk.

at the Coconino Center for the Arts

This intensive workshop is designed especially for producers, directors, and editors.

Presentation of Short Films at the Coconino Center for the Arts

Meet Ross, a horse from the Navajo reservation. Hear his story and share his thoughts as he explains the very essence of being a horse.

Sometime in the future, knowledge is outlawed.

A skateboarder has an accident and finds that he can hear something strange.

Produced by Outta Your Backpack Media, this video is a story about a lover who is not sure how to show her love for her one and only.

A Change is Gonna Come

This PSA was made with Outta Your Backpack Media and the P.E.A.C.E. Project

A discovery of self.

An evocative experimental film takes on the concept of culture in today's world.

This short video addresses uranium mining and the effects of radiation in the Southwest.

Making a Stand at Desert Rock

The award-winning Diné punk rock band Blackfire takes on global warming with a twist in this quick paced video.

Music video for Ethnic Degeneration from the motion picture soundtrack to Mile Post 398.

Music video for Coalition from the motion picture soundtrack to Mile Post 398.

Elder Helen Bitsilly is one of the few Navajo people who still make the arduous journey on foot twice a year to take their sheep to distant grazing lands. The filmmaker follows Bitsilly on what the elder has said

will be her last trek.

A Native woman on an urban street encounters stereotyped misunderstanding in this poignant drama and ironic parable.

Evening Screenings at the Museum of Northern Arizona

A Navajo man named Cloyd in his mid-30s, living in Kayenta, is dealing with his alcohol problem. One day Cloyd decides to turn his life around by quitting drugs and alcohol and making amends with his wife, son, and family. Although Cloyd may think this may be easy, he soon realizes how hard it is to face his demons and deal with the unrelenting peer pressure of his so-called friends.

An exploration of the intricate relationships between Navajo rug weavers and reservation traders. This insightful documentary reveals the delicate balance between maintaining cultural traditions, economic survival, and the artistic validation sought by many weavers.