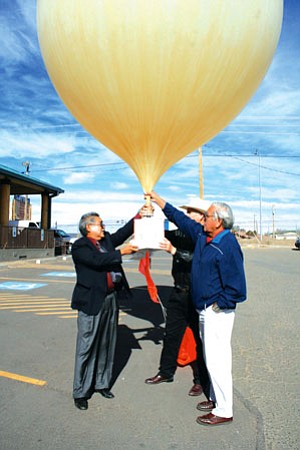 PHOENIX-The Navajo Nation Special Diabetes Project (NNSDP) will approach its fight against diabetes with the cutting edge of technology through a $425,000 grant from the Distance Learning and Telemedicine Grant Program administered by United States Department of Agriculture Rural Development.

The NNSDP will work with a wireless network communication system that includes a set of high-altitude, balloon-borne transceivers, which are launched every 12 to 24 hours. The balloon will rise to an altitude of 65,000 to 100,000 feet and allow a coverage circle of 420 miles, covering all of the Navajo Nation and few hundred miles beyond.

The latex balloons will be filled with hydrogen or helium to provide lift. At launch, the balloon lifts approximately 1,000 feet per minute to the hover altitude of 65,000 feet. The payload consists of the communication and control electronics, control mechanisms and power source necessary to provide digital wireless coverage up to 24 hours.

This will make it possible for a Navajo woman in the remote area near Grand Canyon in the Western Navajo Agency to take her blood glucose reading. If her blood sugar level shows that it is too high, she will punch in the numbers on her Personal Data Assistant (PDA) device and send the message. Within a short time, she will have a health care provider at her hogan door in response to her high glucose reading that she sent.

This scenario will soon be a reality for Navajos who have diabetes, live in remote areas in the Western Navajo Agency and cannot get to a health care facility due to distance, lack of transportation and health issues.

"This innovative and technical communication solution will allow diabetic patients and individuals who are at risk of diabetes to receive access to health care monitoring services that are not available because of the lack of telecommunication services where they live," said Robert Nakai, NNSDP program manager. "Selected patients under the care of the [NNSDP] will receive modified handheld PDAs, which will allow the patients to record and transmit their glucose reading to a health care professional, receive alerts and instruction as needed, through this space-age technology."

Nakai stated that the technology will provide patients and medical professionals a continuous feedback loop which can be used to prevent illness, promote health, facilitate early intervention and maximize the effectiveness of treatment regimes. It will allow the case managers to prioritize and focus limited resources on those who need the most urgent attention.

The total population in the identified service area is 21,933 people who live on 7,205 square miles of land. This equates to an average population density of only 3.15 people per square mile.

The Navajo people in this service area reside in clusters of hogans, trailers or houses. Some of the homes do not have electricity, sewer systems, running water or gas lines. Because of this lack of electricity, patients who are identified as insulin dependent diabetic are living with a Russian roulette type of existence, hoping the medication will not lose its effectiveness or that a visit with a medical professional will catch an abnormal fluctuation in blood chemistry. Eventually, serious complications become a reality. Patients become very sick and the consequences may result in loss of limbs, increase in heart attacks and kidney failures, according to the NNSDP.

The Tuba City Health Care facility determined that at least 41 percent of their population has diabetes or are in pre-diabetes stages.

Because of the remoteness and rural nature of the Western Navajo Agency, the decision was made by the NNSDP to use wireless monitors to help patients and health care professionals maintain the regular contact necessary to practice medicine in a way that promotes wellness and quickly responds to the earliest signs of illness.

Angie Williams, former NNSDP supervisor for the Tuba City Service Unit who established telemedicine with the Tuba City Regional Medical Center and is very familiar with the communities and their population wanted to bring this new technology to the Western Navajo Agency. Before Williams resigned to pursue her studies in clinical administration at the University of New Mexico, she worked to develop this new medical-technology connection with the Western Navajo Agency.

Nakai said that the criteria for determining who will receive the monitor is that the patient must be able to converse, read and write in English. This is because they will need to be able to read the glucometer, enter data into a form on the PDA and transmit it.

The community health worker will be able to assist the client by taking the information other than glucose monitoring such as blood pressure, nutrition and meals consumed by following up during the day or week. Remoteness and rurality will also be used in the determination of who will receive a monitor.

Some of the key staff members from the NNSDP toured the facilities in Phoenix to see the technical equipment involved with such a communications network. During the tour, Nakai released a test balloon into the sky.

"We are very excited about this unique project because it is another step to closing the digital gap that exists on the Navajo Nation for those who have diabetes," Nakai said. "[President Shirley] is 100 percent behind this project and has directed us to get it going as soon as possible."

Nakai stated that it won't be long before a balloon will be launched from Gallup, N.M. with transceivers where it will hover 65,000 feet above the Navajo Nation. When a diabetes client needs assistance because his/her blood glucose is too high, then this information will be sent to central control and relayed to the appropriate facility in the Western Navajo Agency so the medical attention the diabetes client needs will be administered.

"This will be a giant step in space age technology in communication for the Navajo people...one that will make even the Navajo Code Talkers proud," Nakai added.