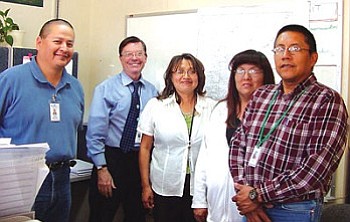 TUBA CITY - For the past seven years, the Tuba City Unified School District (TCUSD) along with community partner, Tuba City Regional Health Care Corporation (TCRHCC) has staged a mock disaster drill each fall to prepare the Tuba City community along with the Hopi villages of Upper and Lower Mungapi for potential community-wide disasters with effective ways to address emergency situations that could adversely affect the Western Navajo Agency area.

The flu shot will be available free of charge to all area Indian Health Service beneficiaries during this mock drill.

For non-Native community members who would like to receive a flu shot during this exercise, the cost will be only $30, with 200 non-tribal vaccines available that day.

The flu vaccine that will be available to everyone during those hours at the Warrior Pavilion is considered 80 percent effective in preventing illness from influenza virus.

Even though some patients have experienced flu like symptoms after receiving the vaccine, these are less severe with complications less frequent.

All community members are urged to participate, particularly elders (55 years and older) and children (under the age of two) are the most susceptible to contracting influenza.