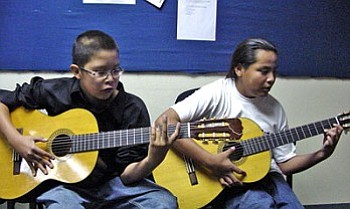 "We want to promote a positive and highly creative atmosphere for our students who are gifted not just in academics but in the creative arts, we want to showcase that young talent" Bedonie said.

Try-outs were fairly rigorous as the junior high talent pool is ripe with young budding performing artists, including a special guitar partnership called the "Adam Duo."

In the case of the two Adams, their instrument of choice is the guitar.

They are playing so well together they will be stiff competition at the Nov. 28 contest.

Quamahongnewa, TC High music teacher, thinks the two are good enough to play publicly with the high school advanced guitar class that, under his guidance, is featured at the Hogan Coffee House during the winter season .

TCUSD currently has music and art programs for its student population at both the junior high and high school levels and is looking to expand that artistic offering to all its elementary and primary level students next school year.

With teachers like Nesmith and Quamahongnewa, programs that offer students a chance to explore the performing arts and encourage artistic talents are nurtured alongside academics and sports.

According to administrators, well-rounded education considers all three areas of this type of academic foundation and students like the two Adams are perfect examples of how academics, art and physical fitness compliment one another.