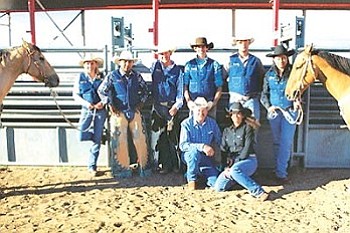 "Choc had a smokin' run, with Casey snaggin' both heels for a score of 5.4," John Doyle, coach for the NPC Rodeo Club, said describing the duo's Friday performance. On Saturday, they finished with a score of 8.5 to split third and fourth place. Combined, Choc and Casey rode away with 242.5 points and more than $2,000 each.

At the Tsaile Rodeo, promoted by Diné College, Oct. 26 and 27, the pair took third in the long go on Friday and fifth in the short go on Saturday. Their overall scores placed them second in the average, earning points for the NPC Club and money in their pockets.

With 352.5 points, the NPC team ropers are in first place in the 10-college Grand Canyon Region standings after four of the 10 scheduled rodeos under the belts. Choc is from Snowflake and is the team's header. Casey is from Aztec, N.M. and does the "heeling."

Two other members of the NPC Club have earned points in their categories, despite minor muscle injuries. Saddle bronc rider Ace Long from Greasewood placed fourth at the Cochise College Rodeo in Douglas Sept. 21 and 22 and is in fourth place in the region with 130 points.

Bull rider Pat Curtin from Show Low missed placing at the Douglas rodeo by 0.1 seconds, but took home nearly $2,300 by winning the Bull Riding Jackpot after the collegiate event. "Both of these rough stock competitors have great skills and athletic abilities, however they have been set back by minor injuries," Doyle commented. "Ace and Pat should be going strong and raking in the points by the spring semester."

Also competing for the NPC Rodeo Club are bull rider P.J. Thomas of Clay Springs, and barrel racers and goat tiers Marrisa Marciano and Rendi Lamb both of Taylor.

"To have our lone team roping duo at the top of the regional standings is quite an accomplishment considering the club only has seven members," Doyle noted. Each college is allowed six men and four women to accrue points at each rodeo. "Some of the colleges in the Grand Canyon Region have as many as 85 members to draw a team from. The NPC Club is small. With the odds against us we are still on top and our men's team has 835 points, to put us in fifth place."

Registration is now underway for the spring semester and Doyle is encouraging students interested in competing with the Rodeo Club to enroll at NPC. To be eligible, students must have a high school diploma or GED, and be enrolled in 12 or more credits at NPC with a 2.0 or better grade point average.

The NPC Club has made a proposal to sponsor a collegiate rodeo the first or second week of September 2008.

Northland Pioneer College serves the residents of Navajo and Apache counties through four regional campuses and six centers with a variety of educational options for academic, career and technical and personal enrichment. NPC supports each student's educational goals through affordable tuition, small class sizes and caring, professional instructors. For more information about NPC programs and services, visit www.npc.edu or call (800) 266-7845.