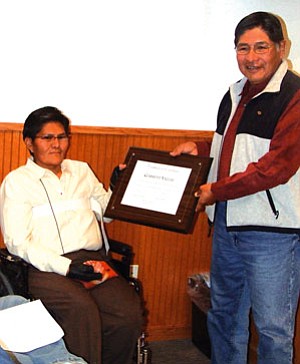 Navajo County Supervisor Percy Deal (right) presents Georgia Yazzie with an award for her son Garrett, who was recognized by the Board of Supervisors for his innovative invention. Georgia Yazzie accepted the award on her son’s behalf since he was attending school in Flint, Mich. and could not attend the event. He did, however, acknowledge his award by telephone (Courtesy photo).

The Navajo County Board of Supervisors honored Garrett Yazzie-a Navajo youth from Pinon-whose promising science career began with a solar panel he built for his family out of discarded soda cans in 2005. It also won he and his family an Extreme Home Makeover that year.

"The way I see it, you've set a goal that can be achieved by young people on the Navajo reservation," said Supervisor Percy Deal. "It can be done by a family that doesn't have all the conveniences."

It all started, Yazzie's mother said, when he got "adventurous" with a school science project.

"He was helping me with my daughter, who has epilepsy and asthma and so we needed to avoid burning wood and coal," Georgia Yazzie said. "One thing led to another and it opened a lot of doors for him."

Yazzie's mother was present at the Board of Supervisors meeting Nov. 20 to receive the award for Garrett, who participated by phone from Flint, Mich., where he is attending St. Mary's Preparatory School.

"This award really means a lot to me," Garrett said. "I'd like to thank my family for encouraging me and for not giving up on me. I know there were tough times in our lives that we dealt with, and so I just wanted to say thank you."

Supervisor Jesse Thompson congratulated Garrett, saying that he was setting a standard as a role model to the youth of the Navajo nation.

"What you have done is going to encourage all our children to continue forward with their education," Thompson said.

Georgia Yazzie thanked the Board of Supervisors for acknowledging Garrett's achievement.

"I really am feeling very touched about what you have done to honor and recognize my son," she said.