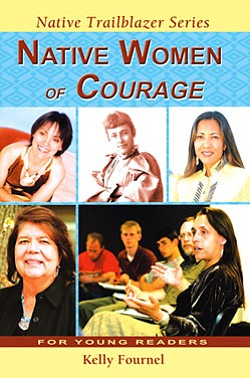 GLOBE - Mary Kim Titla, candidate in Arizona's 1st Congressional District, is one of ten women featured in the book "Native Women of Courage" by Kelly Fournel.

The book for young readers ages 9 - 12 celebrates the lives of 10 remarkable women in North America of Indian or First Nations heritage.

"There are so many people in the aboriginal community who could have been profiled. The hardest part (about writing the book) was narrowing down who I wanted to focus on," Fournel said.

The book features women who have been leaders in a variety of different occupations, such as that of Mary Kim Titla, San Carlos Apache, the first Native American TV news reporter in Arizona.

Titla grew up in Arizona in poverty with no running water for most of her childhood. But she had a loving and supportive family.

Her parents would take the family on road trips off the reservation to show their children what life was like in richer areas.

"I'm humbled and honored to be featured in the book along with women I've admired for most of my life. My message to young people is-if I can do it, you can do it too," Titla said.

Fournel hopes stories such as Titla's will give young people positive role models. "I wanted this book to be an inspiration for kids," she said.

Other women featured in the book include Osage ballerina Maria Tallchief; first woman Chief of the Cherokee Nation Wilma Mankiller; and author, environmentalist and once a candidate for vice president Winona LaDuke.

Fournel was born in Winnipeg and raised in Calgary. She completed a book and magazine diploma at Centennial College.

"Great Women from our First Nations" is part of the Women's Hall of Fame series published by Second Story Press in Canada and The Book Publishing Company in the U.S.

It is available in local bookstores and at the library.