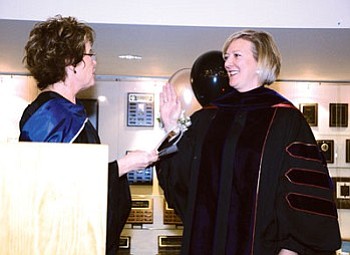 FLAGSTAFF - With a plea to the community to review and comment on the developing strategic plan that will guide Coconino Community College (CCC) through 2011, Dr. Leah L. Bornstein officially became CCC's fifth president Nov. 17.

For those interested in reviewing and commenting on the college's evolving strategic goals and sub-goals, visit the CCC Web site at www.coconino.edu.