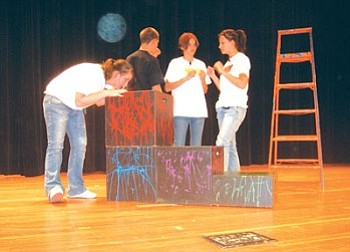 POLACCA - Clean and Sober Theater (known as CAST) performed Nov. 19 at Hopi Jr/Sr High School as the young thespians let the students know about the problems that alcohol and drugs have caused in their lives.

The performers explained they turned to drugs or alcohol because a family member died, they didn't like their family life and after being beat by a sister. They said that it's hard to escape drugs because they can get it from their families, or at their homes or schools.

CAST has been performing its anti-drug skits for four years and performed 43 shows last year. They are based out of Tucson with support from Compass Health Care.

Wright, a 16-year-old, started smoking marijuana when she moved to Arizona from Oregon. She also increased her drug and alcohol abuse after her sister married her former boyfriend.

Wright was also raised in foster families and turned to drugs because of being unhappy with those situations. She said the worst feelings she had from drugs and alcohol was when she had suicidal thoughts.

She was going to overdose on pills, but another student told the principal and her suicide was averted.

Templin, who is 18, started smoking pot and drinking two years ago because she was depressed after being molested at a party. She said she realized she was an addict when she relapsed after being clean for one year.

Templin said all the monologues are true and come from the heart.

Sockett, 17, started using drugs and alcohol after the eighth grade. It wasn't long before he was using meth and cocaine. He should be a senior, but is only a freshman. He is going to try to get his GED. He doesn't make any promises to not use drugs or alcohol, but he has been clean for one month and plans to take it one day at a time.

"Everybody I know but CAST uses drugs," he said.

Sockett said one of the better ways to stay away from drugs is to be involved in activities such as horse riding or sports.

Antonides started using drugs and alcohol when she was 11. After her brothers' two friends raped her, she started using cocaine and thought about suicide before going into drug rehabilitation.

Antonides said after she was raped that she locked herself in her room and didn't tell anyone for eight to ten days. She regrets that and urges those who are raped to report it quickly.

Elise Lopez, who is the stage manager of CAST, recalled how she sold drugs when she was a preteen. She regrets that because she sold to other preteens and is afraid of what that did to them.

She said CAST has helped her stay clean for four years.

"In CAST, you can get out without being judged," she said.