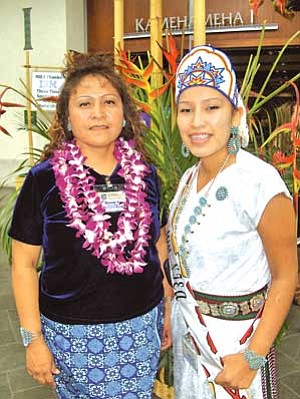 HAWAII - Crystal Carr of Tuba City greeted participants with a bright smile and "Yá'át'ééh" (along with "Aloha") at the recent Nation Indian Education Association (NIEA) convention in Hawaii. She completed her reign as Miss NIEA Youth Ambassador in Hawaii after serving a year. She began her reign in Anchorage, Alaska at last year's convention. Both Carr and her mother, Brenda Tso are liberal arts majors at Diné College with plans to graduate in December. Carr is focusing on Diné Studies while her mother is studying social and behavioral sciences. Both attend classes at the Tuba City branch. Carr was prominently featured at the NIEA convention from start to finish.

As a Diné College student, Carr was a campus Student Government leader and was also a member of the American Indian Higher Education Consortium Student Congress last year. She is also the current reigning Miss Western Navajo.

The NIEA convention showcased the Hawaiian immersion education, which is celebrating 20 years in that state's public school system. According to William Wilson, a Hawaiian educator, "The integrated Punana Leo preschool through grade 12 statewide system is the most developed program for a Native American language in the United States. It has been widely praised by national researchers for its academic and cultural success."

In an Oct. 28 "Island Voices" column of the Honolulu Advertiser, Wilson notes Native Hawaiian students in the immersion education programs experience "school graduate rate above the state average - 100 percent for most years" and "approximately 80 percent of graduates have gone on to college."