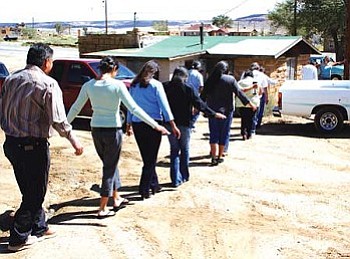 Hopi mediators conduct an exercise called “babysteps” where they learn that mediations require step-by-step progress and patience, and that they can’t all be resolved right away in one step. The mediation workshop took place recently and graduated nine individuals (Photo by Ethan N. Elkind).

The Nakwatsvewat Institute has its first class of graduates who are now certified Hopi mediators. Nine Hopis from various villages completed the 40-hour long mediation training program. Their next step is to be observed in a simulated mediation session and then they can start settling various disputes within their own villages and across the Hopi reservation.

Muriel Scott-Hunter was in the first graduating class. She serves as a tribal advocate in the Hopi Courts and saw this training as a bonus for her career. "It was very intense, but rewarding in the end. The program provided material that will be useful to any mediator. The training was well put together and the trainers were knowledgeable about the subject areas. I think the best part of the training was the role playing because it presented some real situations that occur in Hopi."

"Almost every one of us who is Hopi has a friend or family member caught up in a dispute over a home, a field, or orchard. If people get to the point of suing each other, it ends up costing thousands of dollars, months or even years in court, and no one is satisfied with the remedies the court ends up dictating," explained Pat Sekaquaptewa, executive director of Nakwatsvewat.

"Alternative Dispute Resolution or mediation, will benefit Hopis by providing them with a skilled facilitator who will help them negotiate with each other. Most important though is that individual Hopis will be in control of the decision making."

Under the Hopi Constitution, the villages retain their sovereign authority to settle family and property disputes that may arise between tribal members. However, the Hopi Tribal Court has seen an increase in complex property and family cases involving disputes between village residents in the past decade. Sekaquaptewa and Justin Richland are both Justices Pro Tempore of the Hopi Appellate Court. They have witnessed that surge and hope to alleviate the caseload by training village residents to be mediators.

In 2000, Sekaquaptewa and Richland began Hopi Dispute Resolution Services, which offered mediation and arbitration services to Hopi people. Then in 2006 they received a three-year grant from the Administration for Native Americans in the United States Department of Health and Human Services to start The Nakwatsvewat Institute, Inc. Sekaquaptewa and Richland selected the name Nakwatsvewat because it is a Hopi word that describes the process of resolving disputes in a friendly way.

"It may not work for everyone in every case," says Scott-Hunter, "but it will work for those persons who truly want to resolve their problems through an alternative dispute resolution process, rather than arbitration through the courts."

George Mase also graduated from this program. He says it also gave him a better understanding of tribal jurisdiction. "I hope to develop some procedures for my village board," he said and adds that he might consider trying his hand at being a mediator in the future.

Nakwatsvewat hopes to train a number of Hopi mediators and refer cases to them to mediate. When disputes come to Nakwatsvewat, the organization will help the parties choose one of their certified mediators. Nakwatsvewat will also help pay for the first eight hours of mediation services. That could mean a savings of up to $400. Starting rates for a beginning mediator range from $25 to $45 an hour. Either way it's a savings of potentially hundreds of dollars compared to going through the court system and hiring a lawyer or and advocate.

Plans are being made now for the next 40-hour training program set to begin next spring. To sign up for the spring session or to find out more information about Nakwatsvewat, please contact Donna Humetewa at The Nakwatsvewat Institute at (928) 737-9275 or e-mail her at donna@nakwatsvewat.org.