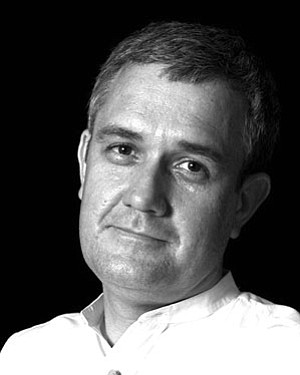 SANTA FE, N.M.-Dr. Robert Martin, President of the Institute of American Indian Arts (IAIA) announced recently that John R. Grimes, Director of the IAIA Museum in downtown Santa Fe, has accepted a position as Vice President for Institutional Advancement of the Cook Inlet Tribal Council. Based in Anchorage, Alaska the council is a Native Alaskan nonprofit organization that provides social and education resources to the region's Native Alaskan community.

Martin noted that Grimes will leave behind a strong record of success as IAIA Museum Director. "Under John's leadership, the museum has greatly increased its local, regional, and national visibility as a center for important exhibitions and programs relating to contemporary Native American creativity. It has also developed active partnerships with museums and organizations across North America, Alaska, and Hawaii."

"On a practical side," he continued, "John has implemented a financial management system that has resulted in a balanced museum budget, expanded membership, and raised well over half a million dollars to support museum exhibitions and programs." Martin also pointed out that Grimes initiated effective outreach programs for New Mexico's Pueblo communities.

"In the months that I have worked with John, I have been extremely impressed with his professionalism, commitment to IAIA's mission and the leadership that he has provided for the Museum. I wish him and his family the very best as he moves on to the next stage in his professional career."

According to James Santini, chair of the Museum Committee of IAIA's Board of Trustees, "John Grimes has fulfilled all of the expectations that the Board invested in him when we asked him to step down from the Board to take on the job of museum director. Now, under the direction of President Martin we hope to build upon the foundation that John established."

Grimes previously served as a White House appointee to the Institute's Board of Trustees from 2003 to 2005. Before coming to IAIA, he was a Deputy Director of the Peabody Essex Museum in Salem, Mass.

Diane Karp, director of the Santa Fe Art Institute, underscored Grimes's vision of museums as places of collaboration. "His methods and ideals are open and inclusive. He sees the museum as a place to bring together ideas and people with the common goal of exploring creativity in all its many forms," she said.

"IAIA is an institution that I believe in and love, one that I will always support," Grimes said. "I am proud to have had a role in helping put the IAIA Museum on a new path. But I have never wavered from the ultimate goal of recruiting a Native American director. Now, working together with ... Martin, I am delighted that we have developed a plan to make that transition happen, building on what has been achieved over the past two years."

A national search for a successor to Grimes will begin immediately. Museum Deputy Director Joseph Sanchez will assume day-to-day administrative responsibilities while the search proceeds.