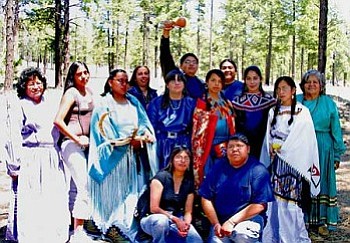 PEACH SPRINGS - Quail, deer, elk, wild onions, prickly pear and other flora and fauna of northern Arizona were common foods among the Hualapai and other tribes of the region.

The project, which was funded by the Christensen Fund, has brought youth and elders together twice a month for field trips across the reservation and surrounding traditional lands. Students have learned valuable skills such as the making of cradleboards, basketry, how to use mesquite beans, prickly pear, jerky and other foods along with oral history as they worked side by side with their elders.

There is a lot of information in Recipes-how to make jellies, breads, muffins, pounded cakes, soups, stews, wild game, meats and teas.

One can find detailed instructions on how to dig and use a roasting pit-an earth oven in which viyal (mescal agave), bird eggs, small seeds or breads are baked. Open fires and roasting pits were the methods of cooking food when the Hualapai did not have stoves, ovens or pots and pans.

Traditionally fruits and berries were eaten fresh or stored for later use. With the introduction of cane sugar by the Spanish, the Hualapai learned to make jelly from the fruit of the prickly pear cactus (alav) and algerita berry (amaq).

In late summer, the Hualapai are involved in the making of mesquite flour. The beans are parched in order to kill microscopic pests, and this can be done in an oven.

Afterwards, the beans are ground into flour and can be used to make mesquite balls, mesquite cornbread or pan bread.

Earthen pottery and fireproof baskets were used to cook stew and mush. Hollowed out barrel cacti were also used. One added heated rocks to bring the stew to a boil, which were replaced as they grew cold.

Wild meats are still a popular food for the Hualapai. Meats were preserved for winter use by the making of jerky (qua:qda duv or elk jerky, qua:q duv sumgwin or deer jerky), or were used with nuts, fruit and fat for preservation. Some tribes called the latter "pemmican."

Roasted quail were not plucked or gutted before cooking. Instead they were singed and baked on an open fire.

Afterwards, the burnt feathers, skin and entrails were removed and the quails were dropped into rock-heated water and simmered for 30 or 45 minutes. The stew could be thickened with corn or seed meal or ko (pinyon nuts).

The students and staff of the Hualapai Ethnobotany Project celebrated their efforts at a community Fall Feast on Nov. 10, sponsored along with another group, Hakdagwiva Ba:j ba wiw joh (Helping the People of Peach Springs).

"This was the culmination of our final project," said Carrie Cannon (of Kiowa and Oglala Sioux ancestry), a wildlife biologist and grant writer. "The students presented poster boards of what they'd made over the year. These documented our field trips on Diamond Creek Road in the Grand Canyon, Indian Point (an archaeological site), the Hualapai Mountains, and other sites, poster boards with photos, and samplings from all the traditional food we had worked with throughout the year.

"We hosted a large feast, corn, squash beans, and beef, as well as elk donated from different tribal members. The kids made elk jerky gravy and pinyon stew," Cannon continued. "It was a community gathering to showcase the traditional foods of the tribe that can be gathered on the reservation. Our elder staff introduced the project and talked about how the Hualapai never used to fry food. It was always roasted, baked or boiled. Nowadays our diets have changed so much and we need to get back to traditional foods."