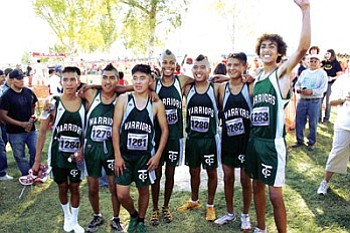 At the 2007 Arizona State Cross Country Championships, Tuba City throttled all challengers to finish with 28 points - the best team score of the day. All five of their scorers earned All-State honors with none finishing lower than 11th. Chinle finished second with 77 points, and Ganado third with 93 points. The victory was Tuba City's record-tying 18th state championship win, matched only by Hopi High School, who won the 1A/2A title to earn its 18th straight state title as well.

Also, for the second year in a row, TC High has yielded another individual state champion in senior, Lance Williams, the son of Eleanor and Don Williams.

Williams' thrilling individual victory led the way for the Warriors. Williams needed a tactically brilliant race to triumph in the blistering Phoenix sun. Williams' main challenger was Cody Wells of Snowflake, a runner Williams has beaten on three occasions earlier in the season, but lost to in the final regular season meet just two weeks earlier.

Roughly two and a half miles into the race, Williams used the final hill to break the race open. Initially Tyler Logg of Chinle was the only runner to stay close, but he soon fell off the pace. Although Wells was now trailing, he was not beaten. After falling 20 meters behind Williams, the Snowflake runner began to close the gap. With 200 meters left Wells was in full stride sprinting furiously. With less than 100 meters to go Wells caught Williams.

Williams said later, "I saw his shadow, and I knew that it was time to go." Williams somehow found another gear, and refused to relinquish the lead over the final 50 meters. At the finish line, Williams (16:30.4) was declared the winner by just six-tenths of a second over Wells (16:31.0). Following Chris Holve's 2006 win, Williams gave the Warriors their second individual champion in a row, and fifth all-time.

Once Williams passed his opponent, he knew he had won the race. "I was really happy. Words can't even explain what I was feeling at the time. I could just hear coach Perry saying to me, 'You're prepared, now just go after it.' I can't thank him enough for being there with me for the past three years. Coach Perry is a wonderful coach. He has been so supportive and consistent with his guidance," he added.

Despite the individual victory, Tuba City's main goal for the day was to reclaim the team championship that the Warriors had not won since 1999. As Williams turned around at the finish a green wave of Tuba City Warriors helped sooth the pain that three hard miles had just placed on his body.

From a team perspective, it was clear that Tuba City's rivals Chinle and Ganado were focused on the Warriors, and the Warriors on them. With strong distance running traditions, the three schools perennially battle for supremacy in the 3A division and are often among the best cross country teams in Arizona. In the preseason polls, Ganado and Chinle were heavily favored, but Tuba City surprised everyone with an outstanding season.

One week before the state meet the Warriors solidified their position as favorites by beating both Chinle and Ganado to capture the 3A North crown. But in the final regular season meet Tuba City lost to Ganado at the Holbrook Invitational - their first loss of the season to another 3A school.

At first glance it appeared that Chinle or Ganado might have the upper hand early in the race. Both schools had three runners ahead of Tuba City's third runner, but the Warriors' 3rd, 4th and 5th runners were close behind running shoulder-to-shoulder as a pack.

By mile two, the Tuba City pack had not folded. Williams had moved into second, Yazzie sixth, Orman ninth, Nez 10th, and Bennett 13th. Every scoring runner had moved closer to the front, giving the Warriors a commanding lead in the team scoring. At the finish it was Williams first, Yazzie third (16:40), Orman sixth (17:01), Nez ninth (17:15), and Bennett 11th (17:22).

Not far behind was Tuba City junior Mitchell Bahnimptewa (33rd - 18:39), and sophomore Herschel Lester (38th - 18:47). With the dominance of the Warriors' top five it would be easy to overlook Bahnimptewa and Lester's fine performances. Bahnimptewa was just 9 seconds behind the last medal winner in the race, such that even if Williams had not run this race, either Bahnimptewa's or Lester's times would have been good enough to give Tuba City the state championship victory.

One of the running success secrets that Williams thought played a big factor in both the team and individual wins was the sandy track they train on everyday at Tuba City - the grueling and now infamous "Dynamite Hill," an uphill and sandy running course that is located right behind the Blue Canyon Memorial football stadium at TC High. "All that running in sand really paid off when we got to a smooth track of pavement and grass, it was so much easier," quipped Williams. Tuba City High School runners practice for an average of about 30 to 50 miles per week.

Despite the eight-year championship drought, Tuba City's distance running fans have never stopped coming out in support of their Warriors. Loud cheers of congratulations from the throngs in green showed that no one needed to do the math. On this day the victory clearly went to Tuba City. Williams, Yazzie, Orman, Nez and Bennett each earned All-State honors by finishing in the top 15.

At the end of the day's races, only three of the 120 teams competing in the six divisions at the state championship meet ran faster than the Warriors. All three were larger schools, and two of the three ran their races in the cool morning air. Among the teams that the Warriors bested were two of the most highly regarded teams in the Southwest.

The championship team was honored Nov 8 with a public celebration including a parade caravan running up Main Street in Tuba City and ending at the governing board meeting where a reception of pizza, cake and punch was served to the team, coaches and visiting family, community and supporters.

Words of congratulations and encouraging support were given from two of the board members during the reception.

Mary Worker stated, "We are so proud of you. I want to say thank you to their supportive parents and the Tuba City and Moencopi communities for traveling to each of their cross country meets and being there when they were practicing."

"In the traditional Navajo way, you can understand what this running dedication is like. My grandmother used to get me up before the sun and say, 'It's time to get up and run, greet the sun.' I see that traditional strength, energy and endurance in our young students," she added.

Alvin Harvey stated, "I am so impressed and very proud of your cross country state achievements. It took a lot of discipline to become a member of this team, but that is how you should always set your goals. Set them for yourself."

With three seniors in the top five, the Warriors have big shoes to fill. But with one junior, two sophomores and a freshman returning next year, the 2008 Warriors also have a great deal of experience to fall back on.