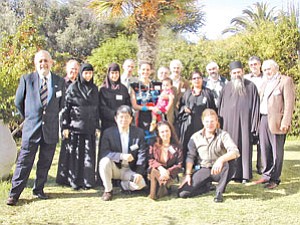 Participants of the Delos Initiative assembled from all over the world to learn about and discuss sacred natural sites and preservation (Photo by Berta Benally).

OURANOUPOLIS, Greece -During a four-day conference in Ouranoupolis, Greece an international assembly convened to present case studies of sacred sites from around the world.

The conference was organized by the Delos Initiative on Sacred Protected Natural Sites in Technologically Developed Countries.

"It is impressive that on an international level, the Holy San Francisco Peaks issue will be helping other organizations and individuals learn how to protect their own Natural Sacred Sites," Jeneda Benally said. Benally is a volunteer with the Save the Peaks Coalition who presented the Holy San Francisco Peaks at the conference by contributing a power point presentation and co-authoring a case study with professor Larry Hamilton.

The objective of the meeting was to understand key points concerning the integration of spiritual concerns in the management of natural sites. The case studies will be used for policy makers in newly developing countries.

The San Francisco Peaks are holy to 13 tribes and culturally significant to 22 tribes.

The San Francisco Peaks have been the focus of a controversy due to a Forest Service and ski resort plan to expand its development and use reclaimed waste water for snowmaking on the holy site.

Tribes and environmental groups have been victorious in the Ninth Circuit Court to stop the expansion but the Forest Service and ski resort have recently been granted a legal review of the decision. An appeal will be heard on Dec. 11, in Pasadena, Calif.

The highest spiritual authority of the Orthodox Church of the World, Ecumenical Patriarch Bartholomew, praised Benally and the other participants of an IUCN workshop for the protection of sacred lands.

"It is with great interest that we learned of the workshop you are organizing in the framework of IUCN-The World Conservation Union," he said. "Its purpose is very close to our interests. The Ecumenical Patriarchate has been teaching a responsible role of human beings towards creation as its stewards and protectors."

The Delos Initiative was launched in 2004 in the context of the World Commission on Protected Areas (WCPA) of the IUCN (The World Conservation Union) and its Task Force on Cultural and Spiritual Values of Protected Areas.

This is the second meeting and its theme was "Providing Guidance for Sacred Protected Natural Sites in Developed Countries."

The workshop took place near Mount Athos, a World Heritage Site and one of the most renowned cultural and natural places on Earth, where spiritual and natural values have worked together for many centuries to model a unique landscape with high biodiversity and cultural value. For more information: hwww.med-ina.org/delos/ and www.savethepeaks.org.