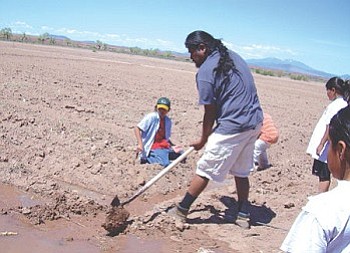 LEUPP - "The Navajo Nation is the biggest ranch in the United States, but what have we done about it?"

Members of the North Leupp Family Farm Board are attempting to do something about this. As part of their efforts to reestablish farming in the Leupp area, they joined with the Diné Water Institute in calling this meeting in order to bring together current resource providers for introduction, and to assess the needs of the North Family Farms.

Jacques Seronde of the Diné Water Institute has worked on farming and irrigation along the Little Colorado River.

"Agriculture is an important way to strengthen Navajo Nation water rights," Seronde pointed out. "I have learned a lot in 20 years, and I'd like to work with the farm board on helping people reach good health and wellness. There is also the issue of income. Do people want to sell their crops, or use their harvest to feed their families in a better way?"

Justin Willie spoke of his work with diabetes prevention through food, leading to the establishment of healing gardens across the reservation.

"There were five kinds of fish in the river and beaver ponds. We are not just looking at human health, but at environmental health as well," Willie said. "There was a time when the whole valley was green. And there is the issue of food security and GMO (genetically modified organisms) seeds. We need to hang on to our wealth-the heirloom seeds. Our first priority is to learn to feed our families, as we did before welfare came in. We were once a valley of farmers."

Ben Jones, with the Grand Canyon Trust, admitted that he wore several hats at the table. "I've been involved with agricultural development for a long time," Jones said. "I have a long history here. There is a lot of potential here. There is talk about Navajo Nation policy on beneficial use of water, and that we need to use it or lose it. Isn't agriculture beneficial use?"

Information gleaned at this meeting will be used to formulate a strategic plan and assess the needs of the Family Farms, while beginning the formulation of a strategic plan that would coordinate more efficiently the support being provided to the farming effort.

The farmers had some positive reaction to the suggestion by the Grazing representatives of the tribe to initiate the process of getting recognition from the nation as an official farm board. Some expressed that this could start the process of accessing tribal resources more efficiently. On the flip side, some farmers were hesitant about the proposal because of possible control of land or complications of permits for land and water usage.

Willie explained that the farm board holds a five-year land use permit and water permit from the Leupp Chapter.

"We have a plan of operation; there are some funds offered in April," Willie said. "How do we tap matching funds?" The concern was also that the need to receive Navajo Nation approval on grants might slow the entire process down, causing the farm board to miss application deadlines.

Donald Price has returned to the reservation after 25 years.

"I've been gone for 25 years, and it seems like nothing has changed on the reservation," he said. "There isn't much water, and we are losing farmers, our language and our kids. Everything is going on in Window Rock."

Price described a vision that troubles him-the problem farmers have on the Navajo Nation.

"We have a problem with land withdrawal," Price said. "We can't do economic development because we can't withdraw land."

Price has done some farming at Tolani Lake, but the farmers there depend on Polacca Wash, which has not been reliable.

"This year the farming was poor," Price said. "I would like to see more feedback from Window Rock on this."

Dennis Walker shared that his parents had farmed all of their lives.

"I've witnessed a lot of things, and there are problems that have yet to be addressed," Walker said. "My main issue is with the soil. I've been farming for the past two years at the farm, and I have seen change in the soil. All of the nutrients are washing out; there is more salt content, and a lot of the topsoil has blown away. We don't have a reliable wind break. The soil needs to be revitalized."

Another area Walker concentrated on was food distribution; he shared that much of the crops he grew were donated to the senior center.

Both Ramona Antone Nez with the Healing Gardens Program and Helena Deswood of Diné College Land Grant Institute offered the possibility of interns or student workers who could come out to assist at the farm.

"We are interested in topics like the water, sustainable agriculture and tourism," Jones said. "We've gotten to know the resource people and wanted to bring the existing people and programs from diabetes prevention through the farm group together. We wanted to get to know each other, and learn who is who so that we could support each other."

Both Seronde and Phil Pohl of Sandia Laboratories in New Mexico addressed the topic of alternative energy as a way to power for irrigation at the farms. Both agreed that it was very possible to do so, and Pohl was optimistic about Seronde's invitation to partner to look at a way to provide that power source at the farm.

In response to Willie's question as to how much land would be needed for a solar array to irrigate 100 acres, Pohl guessed that one acre would be sufficient.

Jones considered the possibility of selling back power to the Navajo Tribal Utilities Authority (NTUA), having heard that the entity was not set up to receive solar energy.

"We would be using the power for three months to irrigate, and then the other nine months we could be selling back green utility credits" Jones said.

Discussion over the use of batteries in these systems revealed that many people don't know how to maintain them and Jones expressed the problem of communicating this knowledge in another language to Navajo people.

Other topics discussed at the meeting included the marketing of organic blue corn chips, the establishment of Navajo varieties of seed banks, locally food productions comprised of livestock/traditional crops, establishing a network of farmers markets, and involving youth in all sectors of agriculture.

Long term plans include retrofitting the farm with its own greenhouse for chili/tomato seedlings and other crops. Many who attended the meeting consider the 100-acre Leupp Family Farms as a nexus of economic and social activities, sustainable irrigation systems, recreation, appropriate energy production and policy implications for Navajo Nation water rights.