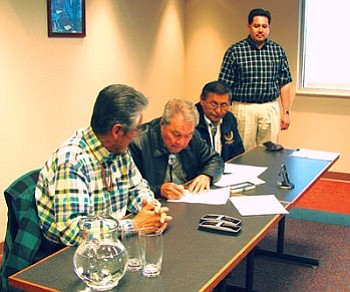 Expressing heartfelt appreciation to Navajo Nation and Gallup officials and staff who worked on the MOU and San Juan River Water Settlement agreement, the President said Navajos in the eastern portion of Navajoland have waited 40 years to see water flow into their homes.

"I have every confidence that we're going to legislate that San Juan River water settlement, and have put in there upwards of $800 million," President Shirley said during the MOU signing ceremony at the Karigan Professional Building. "That having been done, it's water for Gallup, water for the Navajo people, my people in the eastern portion of Navajoland."

President Shirley, Mayor Mendoza and members of the Navajo Nation Water Rights Commission all said the MOU is an example of neighbors working together in partnership to get things done for their people.

U.S. Senators Jeff Bingaman and Pete Domenici have introduced legislation called the Northwestern New Mexico Rural Water Projects Act (S.1171) to enact the settlement of the Navajo Nation's water claims to San Juan River Basin water. The law would codify an April 2005 agreement between the Navajo Nation and the State of New Mexico.

The law would also fund construction of the Navajo-Gallup Water Project to provide a sustainable water supply to the eastern Navajo Nation where an estimated 40 percent of residents haul water for use in their homes.

The Navajo-Gallup MOU and Senate bill also ensures that Gallup has water to meet its future needs by constructing a pipeline to bring San Juan River water to the city.

"The signing of this memorandum of understanding ... is by far a historical step of the Navajo Nation, McKinley County and the City of Gallup working together to bring water to the region," Mayor Mendoza said.

Lena Fowler, vice chair of the Navajo Nation Water Rights Commission, which hosted the signing ceremony, said it has been a long journey to this point, and some individuals and groups did not believe the Navajo Nation and City could work together as they have.

Navajo Nation Attorney General Louis Denetsosie said this was another step in a "long, hard road."

"We had to negotiate a water settlement," he said. "It represents the end product of about 30 years of litigation."

The agreement, which ensures Navajo water rights to 56 percent of the San Juan River, had to be taken to all the affected chapters in the Eastern Navajo Agency to get their consensus.

The signing of the Navajo-Gallup MOU is one more step but shows what's achievable, Denetsosie said.

N.M. Sen. Lidio Rainaldi said it was good to see the partnership between the Navajo Nation and city.

"It's a privilege to see the cooperation between the Diné and the bilagaanas working hard for the benefit mostly of the people and especially for the children to come for our country," he said. "Our children at least need the very basic necessities of life; water, electricity, roads and education. And I think we're charged as elected officials to see that this is going to happen.