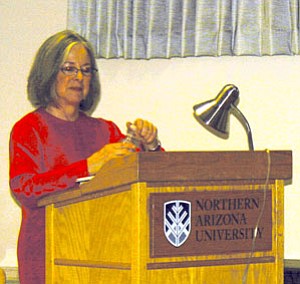 FLAGSTAFF-Think back to when you were a young child. Was there anything more soothing than being read to by a beloved relative? Chickasaw poet, novelist and playwright Linda Hogan brought back that warm feeling as she shared an evening with a gathering of admirers at Cline Library, Northern Arizona University (NAU) on the evening of Nov. 8.

Hogan was introduced by Gary Nabhan of the Center for Sustainable Environments, who shared how Hogan's quiet eloquence once saved a conference where all who were in attendance had come together on issues of sustainability-but were producing only disharmony and exhaustion.

"Linda had sat quietly watching, and finally said, 'Let me clear the air a minute.' She went on to deliver a series of statements. 'Loss of species and loss of culture impoverishes us all,' she said. 'Is everyone on board with that?'"

"She continued to talk, and broke the ice for us all. She brought us together. Without her, we would not have gone on to link these issues in the way she allowed us to," he added.

"That meeting led to a novel," Hogan began. "I was frustrated because we got into a fight about the Florida panther. I said, 'I'm not going back! Here are people who should be caring about the most endangered species in the world at that time, and they aren't"

The experience led Hogan to write her novel, "Power," which tells the story about the killing of one Florida panther.

As Hogan read from poems for an upcoming anthology, one quickly began to see through the same lens that she views the world from, a view that tells her how we all as a culture need to learn a new way of seeing; a world where everything is interrelated.

"We live in a time past the breaking point-we are looking for a way of Indigenous understanding, finding a new people who are trying to learn this," Hogan said.

Hogan's mind is quick-she turns the pages of her imagination quickly, and can launch into a new topic at the turn of a dime. Suddenly she is remembering efforts to exterminate prairie dogs.

"I saw the first prairie dog out where we live," Hogan said. "My neighbors said to me, 'you don't want your horses stepping into a prairie dog hole, do you?' I said that my horses were too smart to step into a hole."

"They talk about people as they walk by," Hogan supposed. "'There goes that old man.' But then I read this old Navajo text that explained how it was the prairie dog who called the rain down from the sky. They have a strong affect on the atmosphere; the loss of prairie dogs will bring the loss of rain."

Once again, Hogan turns a page-mentally and physically, and she begins talking about her poem, "Eucalyptus."

"I was in a bad accident and was in a coma, and then I had foot surgery, but people were kind enough to keep inviting me to work ..." Hogan said to laughter. "I was still being invited to dialogues, trying to participate in the discussion."

At one particular conference, participants left the level floor of the large room and down onto the undulating skin of the earth where she could not follow. Instead, she sat on a deck to listen in, and to admire the beauty of the eucalyptus there.

The poem speaks of seeds as worlds becoming, and the fact that the whole world loves the un-layered human.

"I thought about what that means, to be an un-layered human," Hogan said. "Being a member of a tribe is different than being an individual."

She spoke dreamily of sacred places with the power to gentle humans, of humanity coming from the wind yet given flesh and bone that the wild world tames-a place, she says, where traditional healers are the interpreters of the world, not in the human way, but the way it is; a place where the color of grasses cannot be spoken with words.

Hogan explained that she does not know where the words that build her poetry come from-"For me, it's a mystery, they come from somewhere else."

Hogan shared her work with bird rescue and whale watching.

"I have heard crows talking in paragraphs," Hogan shared. "Magpies and crows collaborate with other animals, and have invented vocabularies. You can hear them talking."

Hogan's first experience with whale watching was magical. She and a friend were watching dolphins cavort from the wombs of kayaks-a part of the sea, yet apart. A loud blowing noise sounded from behind and they turned to find themselves looking into the eye of a humpback whale. After several hours, the pair retreated to the beach and later watched a tiny baby whale surface. The mother had given birth as they sat.

"We heard the songs come up from the bottom of the kayak-I want you to know they are beautiful, the songs rising up from the depths below."

In her poem, "Anatomy," Hogan considers what part of the body dreams, and said that humans consider their hearts and think that love should be the last to leave the body in death, but knows that this is not so.

"Actually, it is the tailbone. That is the last part of the human body to go," Hogan said. She visibly pauses to hear the page turn once again in her mind.

"Wouldn't it be nice to have a tail that you could wag," she says with a smile. "Sometimes I pretend that I do. But I don't tell everyone that."

Hogan fearlessly demonstrates that human beings do not have to be apart or above the natural world. She is clearly a shining, newborn creature sprung from her own earth mother, clearly visible to those who have the patience to wait and to watch-not with the eye, but as an active participant in the world around us all. She is a member of the Chickasaw, who emerged from the sea to the west, following a leaning pole and a sacred white dog-following a path of perfect faith in a place where the color of grasses cannot be spoken with words.