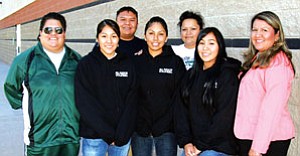 Three Tuba City High School girls volleyball players recently made the All Tournament Regional team and two made the Honorable Mention team in the 3A North Conference.

This year Tuba City High ranked third in the conference, with Monument Valley in first and Window Rock in second. This placement allows each school to make a formal nomination to the All Tournament Regional Team.

Hoover, along with seniors Danielle Goldtooth (Diné) and Charmayne Hemstrett (Diné) also made the All Tournament Regional Team.

"Tuba City High has not had this many volleyball players make either regional or honorable mention teams. All these players are starting players. Five players out of six who start the game is a record for Tuba High."

Final conference stats for TC High is 7-4, which tied them with Holbrook, but Tuba City High won the coin toss. For final State of Arizona AIA power points, Tuba City High is ranked 11th in the state.

"In the past as a volleyball official, I have seen the volleyball program at TCHS going down. When I was asked to coach, I had to find other coaches who had experience in coaching volleyball. These coaches made a tremendous commitment to ensuring that each player had the skills and knowledge in playing. We had to develop a winning attitude to be the best and to take the game of volleyball to the next level. This past season, this was accomplished. What makes TCHS a powerhouse now is knowing that there will be 11 girls returning next season, two upcoming seniors and nine incoming juniors. Although this is a young team, wait for next season to begin, they will be awesome," stated Sombrero.