TC High Chess battles it out 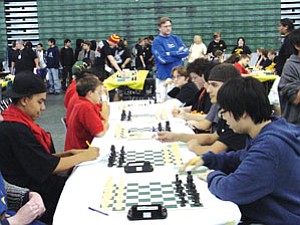 Tuba City High School recently hosted the 3A North State Regional Chess Tournament at the Warrior Pavilion. A number of schools from both off and on the reservation came to compete. TC High's own "Warrior Chessmen" have taken first place honors in several of the most recent northern Arizona schools chess tournaments under the guidance and direction of their head chess coach, Michael Belinte.