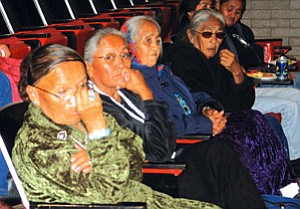 Zion referred to the Intergovernmental Compact made between the Navajo Nation and the Hopi Tribe on Oct. 4, 2006. The compact was signed by Interior Secretary Dirk Kempthorne and Representative Rick Renzi (R-Ariz.) at the Heard Museum in Phoenix on Nov. 3, 2006. The compact laid to rest the 40-year-old Bennett Freeze that held 8,000 Navajo, ten chapters and 1.5 million acres in its icy grip.

Furthermore, the compact allows for an arbitration board to resolve disputes between members of the Navajo Nation and the Hopi Tribe, comprised of equal members from both tribes overseen by an arbitrator with no affiliation with either, a $50 million escrow to be divided between the tribes and buffer zones where no Navajo development would be allowed. A five-year study of eagles is also included.

Electricity has reached some of the residents along the Old Airport Road area outside of Tuba City, but the majority of Freeze residents still await improvements.

The oral arguments were the result of a civil complaint filed by Bobby Bennett Sr., Norris Nez, Arnold Yellowhorse and the Forgotten People against Navajo Nation President Joe Shirley Jr., Attorney General Louis Denetsosie, Council Speaker Lawrence T. Morgan and executive director of the Navajo Hopi Land Commission Roman Bitsuie. Part of their complaint alleged that proof must be given of the location of eagle sites mentioned, and that members of the Forgotten People had not been thoroughly informed of the content of the compact. The plaintiffs asked Kempthorne to delay the signing of the compact until the Navajo Nation court hearing scheduled for Nov. 15. The lawsuit was dismissed on April 25 based on the "public policy" exception under the Navajo Nation Sovereign Immunity Act.

"There are two issues before the court today," Zion opened. "One is whether the trial court was correct in dismissing the action under the Navajo Nation Sovereign Immunity Act."

The second issue, Zion said, is whether the claims made by appellants are recognized by Navajo Nation law.

His clients, Zion assured the court, were not seeking compensation. Rather, they sought declarations from the court regarding several issues.

Holgate pointed out that the negotiations over the lifting of the Freeze had been going on for over 20 years.

"It is one thing for people in Window Rock to negotiate over a long time, and another to let people know what was being agreed on," Zion responded.

Ferguson outlined the process of Navajo Nation government, and that even though the compact had been marked as "secret," details had been shared with chapter officials, which in turn would have been discussed at chapter meetings.

"It is my understanding that there was some general discussion at the chapter level," Zion said. "How can we say we are a democratic government if the government holds the proceedings of the compact secret?"

His clients, Zion continued, suffered a violation of due process of law and the right to petition the Navajo Nation for a redress of grievances.

"What we would like to see is a declaration that yes, there is a taking," Zion said. "The Navajo Nation can set up a process so that individuals have a right of access Navajo Nation courts to make a claim."

Holgate asked Zion whether his clients were asserting that they had property taken, and Zion responded by saying that there was a taking of customary use rights. He allowed that to date there was no actual taking, but that there was certainly a probability of taking in the future.

"The Navajo Nation is unique in that it recognizes customary use, and my clients have said that these rights are compromised by Hopi religious sites," Zion explained.

"We want a declaration that negotiations on the compact were not done in a respectful manner with proper consideration in violation of the Navajo common law concept of hozho'go, Zion continued. "We want a declaration that the compact locks out Native American Church members, Christians and those that practice the Sun Dance religion," Zion continued.

In response to Ferguson's request to define the concept of the establishment of religion, Zion responded that "[i]t would be better for the compact to say that we respect Navajo and Hopi religious practices without attempting to define what those are."

Following the oral arguments, Sally Tsosie said that the right to practice one's chosen religion is one of the most important reasons for the lawsuit.

"We are asking to practice our religion the way we want with no interference from anybody else," Tsosie said. "There are many kinds of religions among us-we are from different denominations. There are Native American Church people, Christians, and people who do the Sun Dance."

Tsosie also listed other important issues that include property and grazing rights.

"We want to move around like we did before [the Freeze], and just [not] overgraze the land," Tsosie explained.

The Navajo Nation was represented by Marcelino R. Gomez, a Navajo Nation assistant attorney general, whose position was that the Tuba City District Court properly dismissed the suit under the Sovereign Immunity Act, and that the claims are not ones that the law recognizes.

"Was the president authorized to negotiate alone, or was there a requirement to involve Bennett Freeze residents?" Ferguson asked. "Were you aware of a consultation requirement?"

Gomez responded that representatives went to specific chapters, and that all of the chapters approved the compact before taking action, and that chapter delegates made policy decisions that the compact was in the best interest of the whole Navajo Nation.

"I think when the Navajo Nation was much smaller delegates could go out and seek input. Now council delegates have the responsibility to represent their constituency," Gomez said. "The council delegate has to make an individual decision as an elected representative. It may be based on information she or he has that this is good, not as good as it could be, but it's as good as we can get and it is better than it was. He or she may say, 'this is much better than I thought it was.' Seventy five delegates said this is in the best interest for the Navajo people."

Holgate questioned Gomez as to the level of duty a council delegate had as to deciding the interest of his constituents, and Gomez responded that this was not defined in any statute, but left up to each individual delegate.

"If you don't like what your elected officials are doing, your remedy is at the ballot box," Gomez pointed out.

In response to further questioning, Gomez pointed out that the compact represented a situation where three sovereign governments signed off.

Further, Gomez stated that speaking of injuries that could happen did not satisfy the requirements to bring a claim before the courts-that in fact one must bring specific claims.

Following the oral arguments, Zion expressed his satisfaction in the proceedings.

"The justices were obviously prepared. They asked the questions that bothered them, and they asked good questions. I'm glad it's over, but I think things went well."

Zion allowed that he could not predict the Court's position by the questions posed.

"I worked for the Navajo Nation Supreme Court for a number of years, and you can't tell what's in a justice's mind by the questions asked. Sometimes they just ask questions to mess with you, but the questions were good and very relevant to what the issues are."

Yellowhorse and other members of the Forgotten People expressed their gratitude to the Supreme Court for taking the time to travel to Tuba City and allowing the packed audience to watch the court proceedings in person.

The Court has taken the oral arguments under advisement and an opinion is forthcoming.