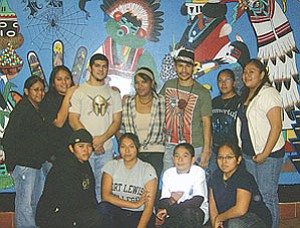 Tizoc and Quetzal Guerrero pose with a few of the Hopi JROTC cadets.

On Oct. 27, the Hopi JROTC cadets had their first benefit concert. There were two performers: Tommy Dukes and Quetzal Guerrero. Patty Talahongva was the emcee for the evening. She opened the concert at 7 p.m. Talahongva is the vice president of the Native American Journalist Association and also the first Native American to host the national news program, "Village America."

Quetzal Querrero, the 25-year-old Brazilian violinist, was the first to perform. He performed with his 18-year-old brother, Tizoc, in the auditorium of the Hopi Jr/Sr High School. In his first song, Quetzal played the "berimbau," a guitar-like instrument, and Tizoc played the "cajon," a box instrument, played like a drum. After the song, he spoke of how Africans were banned from playing their native instruments, which led to how the cajon came to be.

"You can make the most out of anything," he said.

Quetzal played many beautiful melodies, especially, songs about love. In the middle of his performance, Quetzal asked for the crowd's participation. He sang a song in his native language, Portuguese, and asked that the crowd sing along and clap. By the end of the song, the crowd was in a good mood. Quetzal also performed his favorite song by Stevie Wonder, "Don't you worry about a thing." He also sang one of Bob Marley's songs, "Is this love?" These songs got the crowd singing along, as well as Dukes and Talahongva up and dancing.

In an interview before the show, Quetzal was asked how it felt to be playing on the Hopi Reservation. He replied, "Awesome, it's definitely good, I am very fortunate to be here to be playing music for you guys."

After he was done with his performance, he walked backstage where he was greeted by his biggest fans-the JROTC cadets. He and Tizoc gave autographs, took pictures, and gave hugs.

When Quetzal was done, Talahongva took the stage and introduced the next performer-Tommy Dukes. Dukes is known for his blues and Jazz songs. During his performance, he certainly had everyone up and dancing. Especially, Quetzal and Tizoc, who were dancing with the JROTC cadets on stage. Everyone was dancing and having a great time, until Tommy Dukes said that it was time for him to go.

But before leaving, he presented Talahongva with his purple electric guitar. On Nov. 9 the autographed guitar will be awarded to the lucky winner of the JROTC raffle, along with two other contestants who will win an autographed CD by Quetzal.

When the concert concluded, many cadets and parents stayed to get more autographs and pictures from bothDukes and Guerrero. Although, very few people went to the concert, the show still went on. The JROTC hopes that next year's benefit concert will be more of a success.

The purpose of the benefit concert was to raise money so that the Hopi JROTC could have another successful year of going to Hawaii. The cadets are looking forward to marching in the Martin Luther King Jr. parade. The parade is about three miles long.