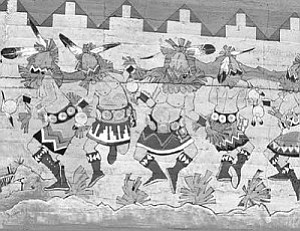 Rarely does anyone in Winslow mention that they are sad to see the mural on the other side of the Standin' on the Corner wall fall, which it definitely will. No, not the well-known blonde girl in a flatbed Ford, but the mural of dancing Yei-be-che by Baje Whitethorn.

"When I painted that mural, Winslow had an art gallery in downtown. People made plans to stay at La Posada and would also visit the gallery. Some people planned anniversaries and weddings here. It was nice." Whitethorn said.

He came recently to Winslow elementary schools to talk to the kids about his Dineh' culture and life as an artist. He currently lives in Flagstaff, Ariz. and is recognized throughout the art world as a premier Native American artist.

"I've been an artist since I was five-years old," he said. "The horse was the first thing I learned to draw."

Young Whitethorn grew up on a high desert plateau of Black Mesa without electricity and running water. One day, his dad drew a picture of a horse for him; whereby, young Baje began practicing and practicing.

Without much paper, young Baje's father folded a piece of one into 16 squares so his son could continue to practice. When he ran out of paper, he began drawing on the wooden walls and eventually into the porcelain of his mother's stove. Then he ended up etching it into the tailgate of his father's truck.

When he saw it he did not say how beautiful it was, Whitethorn said.

"So you scratched it on the back of my truck," said his father.

"And so I named my horse ­ So you scratched it on the back of my truck.

Storytelling is what Whitethorn likes to do. He has learned over the years how to keep a captive audience, which is why he began turning his talent for art into children's books.

"It is nice to see young people interested in books and nice to see parents get books for their kids," he said.

He told the kids that when he turned 34 years old, he quit his job with a nuclear energy company to become an artist. He wasn't sure if or how it would work out, but gave this advice;

"I found that if you are interested in something then you should make time to pursue it, so turn the television off and hide the remote control if you have to," he said. "If you decide to do something, it takes you as a person to get it done, not your teachers and not your parents. You are responsible for your own actions."

He told a few humorous stories about the importance of education too and reminded the kids, "If it wasn't for the teachers I had, I wouldn't be where I am today."