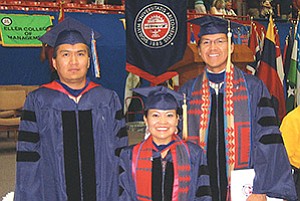 In what may be a University of Arizona record, three members of Arizona's Navajo Nation graduated with Ph.D. degrees in engineering during a single commencement ceremony on May 12. All three grew up on the Navajo Reservation in northern Arizona in homes that had no running water or electricity. Navajo, not English, was their first language.

Like so many Navajo students who go off to college, they missed their families and often had difficulty adjusting to life in what is in many ways a foreign culture. But unlike too many, they stayed on and succeeded in difficult technical fields rather than returning home after a semester or two.

Karletta Chief, Pete Littlehat and Julius Yellowhair not only overcame those difficulties, but excelled as students while studying at UA. Chief came to UA on a National Science Foundation Fellowship, while Littlehat and Yellowhair were funded by the Alfred P. Sloan - American Indian Graduate Partnership. The NSF Doctoral Fellowship is awarded to only about 100 students in environmental sciences annually.

The Sloan program addresses the national need for academically prepared Native Americans who can help spur economic development in their communities and reservations and occupy leadership positions in colleges, universities, government agencies and the corporate world.

Karletta Chief is from Black Mesa and grew up in Cedar Ridge, near the Grand Canyon. She graduated from Page High School in 1994.

After earning high scores on her SAT exams, a high school counselor encouraged her to apply to Stanford where she was accepted and eventually earned bachelor's and master's degrees in civil and environmental engineering. "Stanford was my first exposure to people and life off the reservation," Chief said. "I experienced culture shock and, because my parents didn't have a phone, I felt very isolated." College was also a financial strain. "I remember when my Dad sold his cows so I could buy my engineering books," she said.

While pursuing her doctorate in hydrology and water resources at UA, Chief taught Hydrology 201 and 202, and tutored Native American undergraduate science and engineering students. She traveled throughout the Southwest giving motivational speeches to K-12 Native students, helped establish the Miss Navajo Council, Inc. and Nideiltihi Navajo Elite Runners, Inc. Chief is an active member of Water for People and has won many awards and honors during the past three years at UA. "It was a great honor to receive my Ph.D. with two outstanding Navajo engineers," she said. "This is a testament to the great potential of youth on the reservation to aspire to high academic goals while maintaining their language and culture."

Pete Littlehat grew up in Red Mesa, a small community on the Utah/Arizona border east of Monument Valley. He graduated with a Ph.D. in environmental engineering and says his success "goes all the way back to growing up as kids. My parents emphasized the importance of education. I come from a large family, a poor family, and my parents didn't want us to be at that type of financial disadvantage." Although going off to study for his undergraduate degree in Flagstaff was difficult, he says his close contact with traditional Navajo culture gave him a strong sense of self, which helped him adjust to other cultures without losing his identity. "The teachings of the Navajo culture have been one of my greatest strengths during my academic endeavor," Littlehat said. After graduating from Northern Arizona University, he worked for IBM Corp. in Vermont.

When he decided to pursue a graduate degree, he returned to the Southwest because "I didn't want to be known as the uncle who had moved away. My family is very important to me, and I want to be very close to them. I knew that if I stayed longer, it would be very difficult to leave (Vermont and IBM). It's really hard to ignore the conditions on the reservation, such as lack of water and water services in communities," Littlehat said. Many families still have to bring in all their water by truck. "

I was motivated to get this degree because I would like to go back and be part of the challenge of providing services to communities," he said. He also wants to go back to contribute to the Navajo culture and to help preserve the language. While winning several academic awards at UA, Littlehat also trained for long-distance running. He has run rim-to-rim-to-rim in Grand Canyon twice and is training for a third attempt. Last time he ran the 42-mile route, which has a total elevation change of 20,000 feet, in 14 hours.

Julius Yellowhair grew up in Black Mesa south of Monument Valley. He attended boarding schools from elementary school through high school and graduated from Many Farms High School in Many Farms. Yellowhair earned his undergraduate degree in optical engineering from UA in 1996. Then he joined a small aerospace company in Albuquerque, N.M. Four years later, he decided to attend graduate school and earned a master's in electrical engineering from the University of New Mexico. He returned to UA in 2002 to pursue his Ph.D. in optical sciences. Sandia National Laboratories took note of his achievements through his published work and asked him to join the lab's technical staff. He's now developing lightweight adaptive optics for space applications for Sandia.