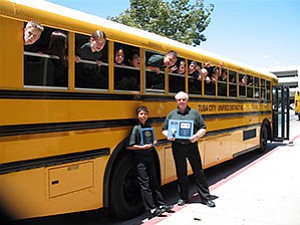 The Tuba City Junior High Band is in its fifth year of playing music under the direction of music teacher Morris Nesmith, who is very active at getting his band students out into the public eye by having them actively participate in music festivals, both on and off the reservation.

On May 10, the Junior High Advanced Band went to Fullerton College in California to participate in a music festival that included 12 other school groups.

The Tuba City group was awarded a Bronze Award for their performance of "New World Symphony," by Dvorak, "St. Louis Blues," by W.C. Handy and "The March from Carmen," by Bizet.

Brandon Wright, a band student and the only trumpet player in the group, received the "Outstanding Musicianship" award at the event. Wright started playing trumpet just over a year ago at TC Junior High.

Once the band competition concluded, the students spent the remainder of the trip at Knott's Berry Farm and Magic Mountain in Valencia, Calif., before returning to Tuba City on May 13.

For more information about the music programs at both TC Junior High and TC High School, call the TCUSD Public Relations Office at 928-283-1185.