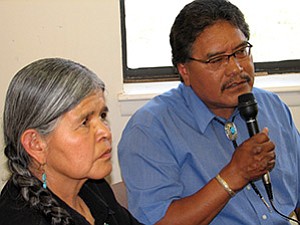 PINEHILL, N.M.-Something big was happening in the small Ramah Navajo community in Pinehill, N.M. on the morning of Friday, May 18. A stream of cars and trucks began arriving. Many of them had been on the road for several hours. They were not the usual visitors to Pinehill; they were engineers, scientists, educators, librarians, computer scientists and artists who came from such organizations as Sandia National Laboratories, Navajo Technical College, KNME-TV, Navajo Nation Television, the University of New Mexico, Western New Mexico University, Diné College, the Indigenous Institute for Native Arts, National Network of Digital Schools, Native American Television Network, the New Mexico State Library, and several departments of the Navajo Nation.

So why were all these people in Pinehill? It was for something they all helped to make happen through a unique collaborative initiative called Internet to the Hogans.

New Mexico State Senator Leonard Tsosie initiated the Internet to the Hogans' partnerships a few years ago to coordinate telecommunication efforts on Navajo Nation lands. He wanted to insure that no one living in his district and on the Navajo Nation was left behind without access to digital resources - not even families living in hogans. He wanted to make sure everyone had access to high-speed Internet service and digital television programming. Now as Council Delegate for the Navajo Nation, he continues to spearhead the Internet to the Hogans' partnerships. At the May 18 meeting, he unveiled- along with KNME-TV's Jim Gale and Bernie Bustos, the Division director for Community Services for the Ramah Navajo School Board-the digital television component of the Internet to the Hogans, the very first transmission of a digital television signal broadcast in the Navajo language.

This was something big!

After being welcomed by Bennie Cohoe, director of the Ramah Navajo Community School and Bernie Bustos, Council Delegate Tsosie thanked the Internet to the Hogan partners for showing their continuous commitment to bridging the digital divide in the state and in the Nation. He assured the group that this would not have been possible without their efforts. Some people call the Internet to the Hogans' partners, "hogan heroes" because of their willingness to share technical resources, develop innovative solutions to technology access and create Navajo language resources.

As the group took their seats in front of a large digital television screen in the new Ramah Navajo School dormitory, behind the scene KTDB's Bernie Bustos, KNME-TV's director of Engineering Jim Gale and KNME-TV's engineer Dan Zillich made the necessary preparations for the premier Navajo language digital broadcast.

The Ramah Navajo television station is housed in the historic offices of the KTDB radio station, the first Native owned Public Radio station in the country that dates back to the early 1970s.

"This will give the children an opportunity to listen to their language and watch it being spoken. And, since it's on television the whole family can get involved. It's the best way to preserve the Navajo language."

Council Delegate Tsosie would like to see more programming in the Navajo language for children.

"Why can't PBS's Big Bird learn Navajo? We could teach him. Our children are always watching television, if they could watch Big Bird and learn Navajo as they eat their cereal in the morning, they could become fluent in both Navajo and English."

The Navajo language and other indigenous languages around the world are at risk of being lost. Recently, New Mexico Congresswoman Heather Wilson sponsored amendments to the Native American Languages Act, which passed in January.

During the digital broadcast, Jeanne Whitehorse also explained that she teaches elders how to use computers at the chapter houses. She explains technical words to them that may not have a Navajo language translation. "Digital is difficult to translate in Navajo," she says. "Now, maybe that's something Big Bird could learn too."

Kee Long, manager of the Office of Navajo Broadcast Services, began in Navajo and talked about the history of television on the Navajo Nation. He developed the first television station, which began in the 1970', NNTV5.

NNTV5 will also transition to digital when funding becomes available. Like the Ramah Navajo station at Pinehill, a new digital system will make it possible for NNTV5 to broadcast on several channels at one time. He and his staff are working hard to digitize Navajo language programs. All public television stations in the country are required by the federal government to transition from an analog system to a digital signal by November 2009. Kee Long ended his broadcast in English, translating for the non-Navajos in the group.

The Internet to the Hogans' partners still have a lot of work ahead of them. Numerous hours of Navajo language programming and production are needed to fill the air time. Ian Jones, a guest from the country of Wales who produces television programs in the Welsh language, told the group how they accomplished a similar effort.

Several members of the Internet to the Hogans group will focus on seeking production funds and developing programs in the Navajo language to meet this need.

The meeting ended with words of appreciation and encouragement to the group from Council Delegate Tsosie. "Nizhoni" he said. "Beautiful! We're not just talking, we are doing something."

Ramah Navajo's Bernie Bustos also extended his appreciation, "I believe everyone who attended enjoyed the meeting and the unveiling of our digital TV station. I really appreciate the partnership we have with KNME-TV. They are the ones who really made this possible and it will be a great service to the Ramah Community," he said.

Tsosie will convene the next meeting of the Internet to the Hogans in Crownpoint in mid August. This meeting will showcase a high-speed wireless system at the hogan level designed and implemented by Navajo Technical College. As one way to demonstrate this, a student living in a remote community will receive communication via voice, video and data from a Native American mentor at a college campus.

"This way young people living in remote areas will have a college mentor and learn about opportunities they wouldn't otherwise know about," Tsosie said.