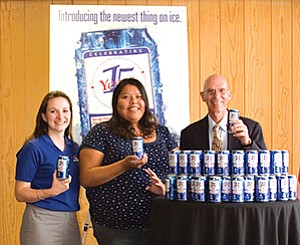 The 20-year-old had filled out all the paperwork and was ready to register for classes at Coconino Community College when she realized she had missed the spring deadline to apply for financial aid.

With no financial resources of her own, she thought her college education would have to wait...at least until a display in a Flagstaff gas station caught her eye. It was a Pepsi display offering a drawing to win a fall semester scholarship at CCC.

Young recalled, "My sister Michelle asked, 'Why are you entering that drawing? Nobody ever wins those things!'"

She excitedly added, "I never win anything! This is a great first-time big win! I really thank Pepsi Cola Bottling Company of Flagstaff for this amazing opportunity. I always wanted to go back to school!"

Young says she hopes to become a teacher and return to her Catholic grade school on the San Carlos Apache Indian Reservation.

In the meantime, she plans to live with her sister, a Northern Arizona University student, and study at CCC.

"I hope to work really hard, get good grades and apply for scholarships to continue on at CCC," she said.

Young had attended one semester at Yavapai Community College in 2004.

"We are extremely pleased to be making this award to Cynthia," said Nackard Companies Marketing and Special Events manager Laura Davis.

"Cynthia is exactly the kind of individual we want to help. She has well-defined educational goals, she's motivated and she wants to give back to her community with the skills she acquires at CCC. This scholarship has given her the boost she needs to put her plan into action," Davis said.

"Pepsi Cola Bottling Company of Flagstaff has been a strong supporter of CCC and access to higher education in Coconino County. We look forward to seeing Cynthia on campus and encouraging her success," Jordan concluded.