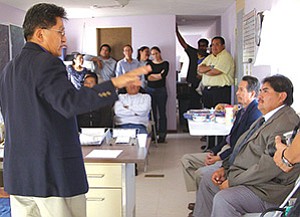 Ben Nuvamsa addresses Hopi Vice Chairman Todd Honyaoma Sr. and members of the Hopi Tribal Council during an organizational planning meeting held prior to the elections. Before running for chairman, Nuvamsa was hired by the tribe as a consultant to provide insight on effective management and communication (Photo courtesy of Ben Nuvamsa).

KYKOTSMOVI-As the case of Ben Nuvamsa's chairmanship twists and turns, Nuvamsa is digging into his elected position and taking advantage of each and every moment.

"We're trying to get caught up and taking first things first by establishing our administrative structure and clarifying protocol," he said.

On Thursday, May 17, the Hopi Appellate Court issued an extraordinary writ and temporary restraining order granting Nuvamsa and his staff a 15-day period in which to occupy the Hopi Chairman's Offices and assume their duties. According to the Appellate Court the issuance of this action falls within its jurisdiction pursuant to the Hopi Tribal Ordinance which states, "The Appellate Court shall have power to issue any writs or orders necessary and proper to...prevent or remedy any act of the Trial Court...where the Trial Court unlawfully fails or refuses to act within its jurisdiction." The Appellate Court determined that because the Hopi Trial Court had not addressed Nuvamsa's complaint for a temporary restraining order on April 4, the Trial Court acted in "violation of its duty," and found it "...necessary to grant the extraordinary writ, to act where the Tribal Court has refused."

The Appellate Court statement found cause to issue the restraining order to "prevent imminent and ongoing harm to the person seeking the order" (Nuvamsa). According to the Appellate Court, immediate and irreparable injury, loss, or damage was shown in the fact that Nuvamsa and his staff could no longer sustain themselves without work.

The writ stated, "The Petitioner has asserted that the acts of the [Hopi Tribal Council] have prevented him from assuming his job as chairman and prevent him from hiring and maintaining staff. Importantly, as time elapses he will not be able to retain the staff he has selected as they will be forced to seek alternative employment. This will detrimentally affect his ability to perform the job of Chairman. In turn, the [Chairman's] inability...to perform his job adversely affects the entire Tribe."

According to Nuvamsa, one of his integral staff members was forced to seek alternative employment due to the extended amount of time (approximately two months) that the Hopi Tribal Council prevented Nuvamsa and his staff from filling their positions.

"We lost a key staff member-our personnel director-who was in charge of heading up the revision of our strategic plan," Nuvamsa explained. "I think he'll still be available to the tribe, but just not in the same way. People need to survive to provide for themselves and their families."

When Nuvamsa's staff returned to their offices on Friday, May 18, they found the doors locked.

The Hopi Tribal Council had met earlier that morning and determined the extraordinary writ as ineffectual on the Council. In addition to preventing Nuvamsa and staff from occupying the tribal headquarters, Hopi Vice Chairman Todd Honyaoma Sr. issued a memorandum stating that the "Tribal Council controls tribal revenues and tribal real property and will not recognize the Appellate Court's attempt to direct the Council to take actions concerning the tribe's revenues and property."

Thus, the Council and Vice Chairman attempted to keep Nuvamsa and staff from the building and also, from being paid for performing their duties.

However, on the morning of Monday, May 21, Bureau of Indian Affairs (BIA) officials accompanied Nuvamsa and his staff into their offices and subsequently arrested Honyaoma for violating the temporary restraining order. Although counsel for Honyaoma argued that the Appellate Court lacked the jurisdiction to issue the restraining order, this claim was found erroneous. Following Honyaoma's acceptance of the order and commitment to uphold the writ, he was released on the afternoon of May 21.

To date, Nuvamsa's staff is conducting business within their offices and Honyaoma has yet to return.

In the past two months the Hopi Tribal Council and Vice Chairman have claimed immunity from tribal law asserting that they are outside its jurisdiction. However, the Appellate Court determined this assertion false stating, "it is established law that this immunity does not extend to acts committed by [council members] when they act outside (emphasis added) the scope of their jurisdiction and authority."

Nuvamsa also maintains that the actions of the Council are illegal and hopes to permanently occupy his elected position as soon as possible.

Nuvamsa said his persistence in pursuing the position that he was elected to in February is fueled by his supporters. "There's been an outpouring of support. I cannot express how much support I've received," he said. "The peoples' persistence and words of encouragement have been the driving force in keeping the fight going. This has been tough, lengthy and frustrating, but when I close my eyes, I see their faces before me-all the people's faces-that keeps me going."

Nuvamsa explained that the Hopi people want to move forward and work on important issues such as the stance on water use and mining, the constitution, and uniting the Hopi and Tewa peoples.

"When I was at the middle school graduation, several people came up to me and said, 'Help us get out of this mess.' Unfortunately we've lost how many days now, but we're here to help," Nuvamsa said.

Nuvamsa explained his intention to work with the Council and Vice Chairman and to reinforce the administration's support for the staff and villages.

"The door is wide open on my side," he said.