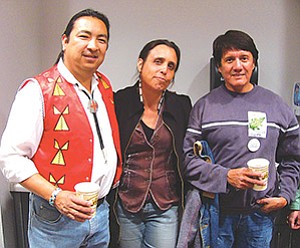 Steve LaRance (left, artist and father of Nakota LaRance), Winona LaDuke and Ron Tohani Jackson spend time together after LaDuke's passionate presentation. Jackson painted the design for the concert poster and T-shirt, and presented LaDuke with the original artwork (Photo by S.J. Wilson/Observer).

FLAGSTAFF-The Indigo Girls, a dynamic duo that first hit the music scene in the 1980s, have spent well over a decade working with Winona LaDuke in spreading an important message. Part of that message involves using natural resources in an environmentally friendly, sustainable way. Another part includes the foods we eat. Finally, there is a component that explores Indigenous communities teaching their own children.

Amy Ray and Emily Saliers (the Indigo Girls) performed in Shiprock, N.M. on May 21 and the following night performed at the Pine Mountain Amphitheater in Flagstaff. Hopi reggae artist Casper opened in N.M. while Sonaya and the People's Crew opened in Flagstaff, along with a special performance by Nakota LaRance, nationally famous hoop dancer (who also appeared in last weekend's epic "Wounded Knee").

Honor the Earth, for which LaDuke serves as executive director, describes itself as "a voice for the Earth, a voice for those not heard." LaDuke met the Indigo Girls in 1992 at an Earth Day rally, and the singer/songwriters offered their assistance. The two-day tour last week raised money and awareness to stop the construction of the Desert Rock power plant on the Navajo Nation near Shiprock and to support the Just Transition to Safe Energy effort spearheaded by several local and area environmental justice organizations, including the Sierra Club and the Just Transition Coalition.

Following Sonaya, LaDuke stepped out onstage to loud applause that continued throughout her presentation. Savvy, intelligent, humorous and hopeful, LaDuke is a powerful presence-a fact that became clear quite quickly to people in the crowd who did not recognize her name.

"Money is not all you can do to draw attention to a cause," LaDuke said backstage. "Yesterday the Indigo Girls were in Shiprock-people came out to hear them. You can do more [than give money], you can show up at events and lend your support."

"I'm absolutely sure that we [don't] need any more power plants that use 1.4 billion gallons of water in an area with no water," LaDuke added.

She spoke of meeting a class at Shiprock Middle School.

"Twenty nine [out of 60] students admitted that they had at least one family member who worked in area power plants," LaDuke said. "About 16 had family members working in a mine. These kids need hope, not an economy that cannibalizes the Earth Mother."

In response to the fact that whenever public meetings are held concerning coal or uranium mining, Native employees always come out to defend the operation and their jobs. LaDuke offered solutions.

The Navajo Nation, LaDuke said, is a very viable candidate for renewable energy.

When LaDuke and a friend looked at the acre-feet numbers that continually surface in any discussion of the use of water for coal slurry and the operation of coal-fired plants, they found them incomprehensible.

Describing herself and her friend as "nerds," the two sat down and worked those acre feet into something more understandable.

"We came up with an amount of water that was the height of three Shiprocks. That is awesome," LaDuke said. Shiprock stands approximately 1,700 feet high.

"We wanted to recognize the work of the Just Transition Coalition as a national model for doing the right thing-moving from coal and uranium to a renewable economy," LaDuke said.

LaDuke also believes that reservation incomes need to remain on the reservations. She looks to local food economy as one way to see that happen.

"Take for example the school food program. Schools spend hundreds of thousands per year to purchase food-this money should [be going] to local farmers," LaDuke said.

At White Earth schools in Minnesota, food is provided locally through USDA certified producers. This is something Navajo Agricultural Products Industries (NAPI) could achieve-as well as going organic, LaDuke said. This would create jobs as well as retain thousands of dollars.

On Navajo, as well as other reservation communities, residents spend approximately one-fourth of their income on energy-gasoline for trucks and cars, inefficient housing and energy bills.

"We don't have dinosaurs here-we should go renewable," LaDuke said.

Solar, wood burning stoves and more efficient housing has resulted in a 20 percent reduction in energy bills, according to LaDuke.

Finally, LaDuke sent out a message to Native youth.

"You can't buy your way of life in a mall, or at Wal-Mart," LaDuke said wryly. "All of our youth's peers are out shopping-it's the way of life of the American Culture. The biggest Wal-Marts in the country are next to Indian reservations," LaDuke said. "I understand that people want something cheap, but..."

She left the sentence hanging, but her message was clear.

Out front, the Indigo Girls continued their set, which was scheduled to close with a great crowd pleaser. Four women who had bid over $1,000 each to sing with Ray and Saliers made a very impressive back-up group. This performance re-energized the crowd, and the Girls returned to sing three more songs.

Afterwards, Ray and Saliers, as well as LaDuke, met with over a hundred fans who had paid for the honor of attending an after-show reception. There, despite the fact that they were scheduled to leave for Phoenix shortly, Ray and Saliers signed autographs and posed for photos until after 11:00 p.m.

Winona LaDuke is a member of the Mississippi Band of Anishinabeg of the White Earth Reservation in northern Minnesota. Among her many accomplishments, she is the founding director of White Earth Land Recovery Project and ran for Vice President of the United States in 2000 alongside Ralph Nader for the Green Party.