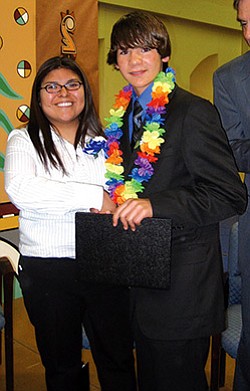 POLACCA-The curiosity for knowledge is something to celebrate.

That is the message keynote speaker Carlene Tenakhongva brought to the 97 Hopi Junior High students who were promoted May 23 during the school's ceremony in the gymnasium.

Hundreds were forced inside because of the rain earlier in the day.

Tenakhongva, a teacher's aide at Hopi Jr/Sr High School, has been accepted to attend law school at the University of Arizona.

Valerie Kooyaquaptewa, president of the Hopi Jr/Sr High School Governing Board, praised Tenakhongva as an outstanding role model who will focus on law for Indigenous people and then return to Hopi to help her people.

But for this day, Tenakhongva praised the junior high students and urged them to continue to build their character. She told the students that they have the capacity to learn and grow as they go through their educational journey.

"Although the journey can be difficult, you have proven that you can overcome the obstacles," she said.

Tenakhongva, who graduated from Dartmouth, said that growth also brings responsibility. She added that the innate knowledge that they have of their traditions and culture will help them.

Tenakhongva, who graduated from Hopi High, encouraged the students to be involved with drama, chess or other extra-curricular activities.

"Take advantage of the experience. Experience things," she said.

Tenakhongva thanked the parents, grandparents, aunts and uncles who have supported the students.

"Although those voices weren't always heeded, that voice is needed," she said.

Valedictorian Dominique Halwood told the students that their education had just begun.

"Knowledge is power," she told her classmates before thanking them for being her friends.

She also read quotes by Eleanor Roosevelt and Chief Manuelito, both emphasizing the importance of education.

Salutatorian Amanda Onsae said earning this honor showed that her hard work was not in vain. She said the past two years were fun, but challenging.

Onsae said her teachers had high expectations because they knew the students were not done learning.

"They know we're moving onto high school to prepare us for our future dreams and goals," she said. "In high school, we must work harder in all subject areas.

Onsae sent thanks to her parents and to Hopi Junior High Academic counselor Kay Lowe for helping her through the years.

Principal Sinquah thanked parents and relatives for supporting the school, but warned the students that high school will be tougher. Sinquah advised the students to ask questions.

"You don't learn if you don't ask questions," he said.