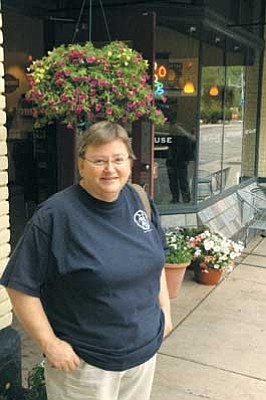 After over a year on city council, Winslow City Councilwoman Sue Bumpus had to resign last Tuesday because she was offered a job by the City Administrator Ferguson, to be the new code enforcement officer for the city of Winslow.

State law does not allow someone to hold office and work for the city at the same time, so Bumpus chose to have a job.

Earl Wagner recently resigned from code enforcement, opening up the position. Sherry Lancaster, human resources director for the city, said that the job had been filled. This was a few days before Bumpus agreed to take the job. Lancaster also said that the city gave the job to a current city employee because it is the city's policy to offer a vacated position to all existing city employees before opening it up to the public.

Winslow City Council will have made a decision as to who will fill Bumpus' council seat soon after this issue has gone to print. In the last council election, Winslow Resident Roy Crain received the next highest amount of votes, losing to Bumpus by six votes.

"I will miss being on Council," Bumpus said. "But I still plan on contributing to the community."

Bumpus said that at this point in her life she is interested in trying some other type of work other than nursing. She used to commute to Peach Springs for work, but there were some complications with that job aside from it being over 150 miles away.

"We still have Gentle Soles open, but that does not get enough business to make a living on," she said.

Bumpus said she and the city are changing the title of code enforcement to code compliance to reflect the positive direction that this position is planned to take. This position was taken out of the police department and placed into the sanitation department.

"Sanitation is the department that is going to have the resources needed to help with clean-ups," she said.

Bumpus will be working under Utility Manager Allan Rosenbaum who organized the last round of clean-ups in Southside and Coopertown. Together they plan on being more proactive in getting compliance to code violations, but their approach will be collaborative more than punishing.

How this process works is that if for example someone has a junk car that is leaking fuel parked on their front yard, code compliance will give them a friendly visit to ask if they would like help moving it or disposing of it. If nothing is resolved, a letter will be issued. If nothing still, another letter will be sent. If there is still no compliance or interest in working with the city, then the city may go forward and enforce the code by issuing a citation or putting a lien on the property.

Code compliance would like to facilitate neighborhood associations and watch programs too.

"People are welcome to do what they want. If they want to get organized and do things their own way that is fine," she said.

Bumpus moved to Winslow in 2003 from Tucson. She said she was inspired by the momentum of downtown before the Standin' on the Corner fire.

"I hope to see more involvement as time goes," she said. "It would be nice to see new faces at events and meetings."

As for her stint with council, Bumpus said her best accomplishment was her help with the controversy between the Chamber of Commerce and the city.

"Sometimes people take things too personally," she said. "In politics, you need to take your ego out of the equation."

Issues she believes will be big in the future are water, economic development, impending community growth and increasing funds for capital improvements.

"An increased bar and restaurant tax will be important to educate residents about," she said. "If Winslow is going to get anywhere and grow at all they will need to get this."