Wind advisory-Harness it for power 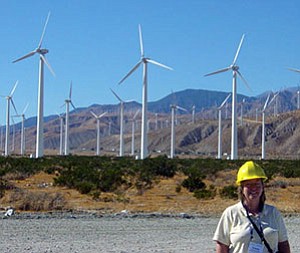 Susan Williams is part of an NAU team helping to get data about wind power into the hands of the public (Courtesy photo).

FLAGSTAFF - The answer to conserving the state's natural resources might just be blowing in the wind, according to a report released by researchers at Northern Arizona University.

NAU's Sustainable Energy Solutions group recently issued Arizona Wind Energy Assessment reports for eight Arizona counties, estimating the amount of wind power that could be harnessed and the possible economic impact it could have on six of the counties.

The goal of the project is to increase Arizona's use of the clean energy by providing data that will encourage developers and government agencies to harness wind power.

"We are hoping this information will encourage policy makers in the state to view wind energy as a viable part of Arizona's energy portfolio and to create policies that will promote wind power development," said Susan Williams, an associate professor in the College of Business Administration and organizer of the project.

The assessment reports, funded by the Arizona Wind Working Group, were issued to the Arizona Corporation Commission, state legislators, county commissioners and supervisors as well as the state's wind energy community. The information also is available for public use at www.ses.nau.edu.

"We want to make Arizona a wind-friendly state," Williams explained. "Wind power is cheaper than solar power, and by producing it locally, we increase the menu for renewable energies in Arizona."

Researchers based the amount of developable windy land in each county on the TrueWind maps acquired by NAU in 2003. Coupled with an extensive geographic analysis that excluded land not appropriate for wind development, the reports focus on land that could be developed anywhere from now through the next 20 years.

Williams is part of the Sustainable Energy Solutions, a renewable energy research group on campus that includes faculty from College of Engineering and Natural Sciences, the College of Business Administration and students such as Grant Brummels, a geographical information systems graduate student who performed the extensive geographical analysis, and Stuart Wells, a graduate student in business who created the maps.

Tom Acker, an associate professor of mechanical engineering, and one of the nation's few experts in wind measurement technology, said the wind assessment reports are allowing Arizona to put its "finger on renewable wind energy resources."