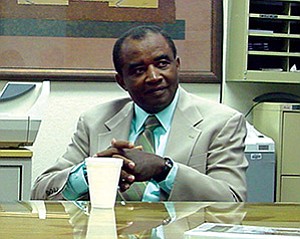 TUBA CITY-The Tuba City Unified School District (TCUSD) Governing Board is announcing that after an extensive search and selection process, a finalist has been selected for the superintendent position. Dr. Eugene Thomas, who is currently the superintendent of Peach Springs Unified School District in northwest Arizona was selected unanimously on May 17 by the TCUSD Governing Board. Dr. Thomas will begin July 1.

This announcement is the culmination of a nationwide search conducted by the TCUSD, with assistance from the Arizona School Boards Association. The selection of Dr. Thomas is the result of many hours of application material reviews, comprehensive interviews of semi-finalists and careful assessment of qualifications of the finalists by John Gordon of the Arizona School Boards Association and the TCUSD Governing Board.

Thomas has served as superintendent of the Peach Springs District since August 11, 2005. The Board was impressed with the academic and vocational program improvements, facility construction, technology implementation and personnel improvements made under his leadership. Thomas previously served as a principal, special education director and teacher for the district.

Prior to this, Thomas earned his doctorate at Kennedy-Western University in California. He is a military veteran who has also served as an air traffic controller.

Jim Kieffer was named interim superintendent in February following the untimely death of Dr. Hector Tahu. Governing Board president Alvin Harvey said, "We had a very good finalist pool which [made our decision difficult]. We feel we were headed in the right direction under Dr. Tahu's direction and are grateful that we found such a good interim to assist us the last several months. We look forward to welcoming Dr. Thomas and continu[ing] with our improvements."

The Governing Board would like to extend a huge "Thank You" to those individuals who accepted to sit in on the community and staff forums with the final four candidates.