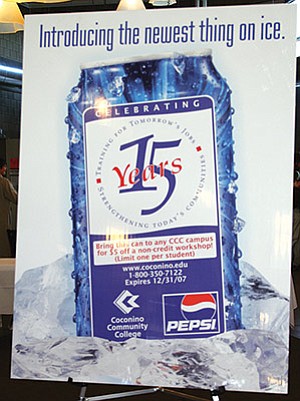 FLAGSTAFF-Pepsi Cola Bottling Co. of Flagstaff and Coconino Community College are quenching your thirst for education with a special limited edition Pepsi can that celebrates the college's 15th anniversary. Pepsi and college representatives unveiled the commemorative Pepsi can at CCC's largest fundraising event, Palette to Palate, Friday, April 27.

About 400,000 new Pepsi cans are now available throughout northern Arizona wherever Pepsi products are sold. On the cans is a coupon for $5 off non-credit CCC workshops.

"As the school year draws to a close, we want to highlight CCC's 15th anniversary celebration and support the college in a very visible way for its efforts in training for tomorrow's jobs and strengthening today's communities," said Nackard Companies Marketing and Special Events Manager Laura Davis. "CCC has had a powerful impact on the county's workforce and certainly has made a big difference in many lives. We hope this new can will serve as a reminder to folks to register for summer and fall classes and to use the can as a coupon for the many workshops that are being offered."

CCC Vice President of Academic Affairs Dr. Kathleen Corak thanked the local bottling company for the unique and generous gift. "Pepsi Cola Bottling Company of Flagstaff has been a long-time supporter of the college. Throughout and even before our 15th anniversary celebration, Pepsi has been there promoting the benefits of higher education at CCC."

Pepsi Cola Bottling Co. of Flagstaff currently has displays in Flagstaff, Williams and Page grocery stores offering a drawing for a fall tuition waver, a value of nearly $800. Pepsi is expected to announce the winner of the drawing in May.