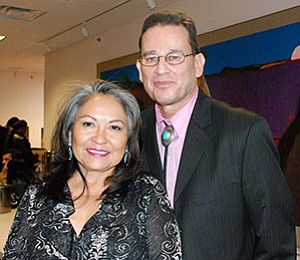 "We are delighted to have Dr. Martin, a preeminent leader in education, serve as our next President. We are confident he has the vision to lead us in making IAIA the premier institution of higher learning in Native American art and cultural studies in the United States. Dr. Martin's vast experience in academia will be a strong asset to our institution," said Kieve.

Martin has extensive experience in higher education as a faculty member and administrator. He previously served as president of Southwestern Indian Polytechnic Institution (SIPI) in Albuquerque, N.M. from 1981-1989 and at Haskell Indian Nations University in Lawrence, Kan. from 1989 -1999. He also served as president of Tohono O'odham Community College from 2001-2005. He is a member of the faculty and associate head of the American Indian Studies Programs at the University of Arizona.

"I am honored and excited to be selected as the president of the Institute of American Indian Arts. I look forward to working with the IAIA Board of Trustees, faculty, staff and students in continuing to build upon its rich history and tradition of excellence in art and cultural education for American Indians and Alaskan Natives," Martin said.

Kieve added, "Dr. Martin is highly regarded among educators as a person of great skill and vision. He's well respected and knowledgeable, and is a strategic thinker and problem solver. We will put his talents to work as he guides us in shaping the future of IAIA, and warmly welcome him into the IAIA family."

Martin is married to Luci Tapahonso (Diné), a writer and professor of American Indian Studies and English at the University of Arizona.