Dan and Arlo Namingha-A fascination with dualities at MNA 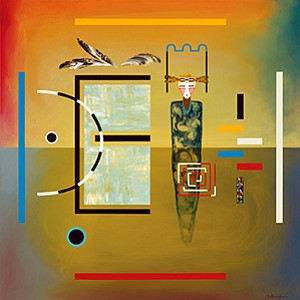 FLAGSTAFF-A gifted and internationally-acclaimed contemporary painter and sculptor, Dan Namingha had his first solo museum exhibition at the Museum of Northern Arizona (MNA) in 1977. An exhibit of 45 new paintings and sculptures entitled Elemental Forms: The Art of Dan and Arlo Namingha, opens June 17, completing a thirty-year journey for Dan-the father-and his son, Arlo, an already recognized sculptor.

The work of both artists alludes to Hopi cosmology and symbology, affirming and extending their Hopi/Tewa identity while breaking with the traditional limits of Indian art through modern minimalism.

"Dan Namingha's paintings and sculptures are among the most powerful abstract artwork being created in the Southwest today," says MNA director Dr. Robert Breunig. "His abstract figures allude to the timeless nature of life on the Colorado Plateau and the unity of the spiritual and physical worlds."

About his work, Dan says, "Through a process of fragmentation and assembly, I visually condense my subject matter to convey the greatest artistry with minimal elements." Landscapes and ancient Hopi symbols, ancestors from his homeland, spirit messengers, katsinas carrying blessings, cloud people, and other abstracted spiritual imagery take form among his signature surface textures.

"I see myself as a kind of bridge between worlds," he reflects, "trying to find that center line of balance. It's not always easy, but I don't think it's easy for any human being." He is fascinated with dualities and the point where they meet physical and metaphysical, night and day, dark and light, life and death, human and divine-and with recurring themes of katsinas, First Mesa, and the Hopi migration story.

Alan Petersen, MNA's guest curator of fine art says, "(Dan) Namingha's close relationship with MNA dates to his first exhibit here in 1977, when his iconic painting Walpi Night Dance was the signature image for the Hopi craftsmen show. Today, he is an acknowledged master. The complimentary concepts of duality and balance are important themes in his work and he expresses them through a highly refined, modernist vocabulary drawn from his heritage. His imagery is strong and elegant, emerging from richly textured surfaces that evoke the earth and atmosphere of his homeland."

Born in 1950 in Keams Canyon, Dan now lives in Santa Fe, N.M. His formative years were spent in Polacca and Hano (also called Tewa Village, a distinct community within the greater Hopi society) on First Mesa. References to this homeland are common in his work. Dan studied at the University of Kansas in Lawrence, at the Institute of American Indian Arts (IAIA) in Santa Fe, N.M., and at The American Academy of Art in Chicago. He began showing his work in 1972 and has participated in over 60 exhibits. His work is now at the Fogg Art Museum of Harvard University, the Smithsonian Institution in Washington, D.C., the Sundance Institute, the Wheelwright Museum and Museum of Fine Arts in Santa Fe, N.M., the Heard Museum in Phonenix, the Palm Desert Museum, and numerous foreign museums, including the British Royal Collection in London and several U.S. embassies.

Dan opened his own gallery in Santa Fe in 1990-Niman Fine Art-which he runs with his family. In an effort to take control of the direction of his career, he has circumvented the traditional art system's pigeonholing or non-recognition of Native or regional artists.

Dan's eldest son, Arlo began his life as an artist in his father's studio, learning both by observing and working quietly on his own in three-dimensional form, which led to his studies in drafting and design. His current sculptural works combine wood, clay, stone, and bronze to create a contrast.

Arlo shares, "My work not only reflects the figurative aspect of my Native people and their surroundings, but also cultural images, landscapes, and symbolism. Always exploring new avenues of possibilities, the work possesses a foundation, but moves constantly in different directions, investigating the boundaries of the non-objective. I minimize literal images, not to recreate them, but to draw from them and my personal experiences."

After managing Niman Fine Art for ten years, Arlo is now focusing on his art career. He has had recent exhibits in the southwest and on the East Coast and his works are included in many private and museum collections.

Both Naminghas have a far-reaching artistic lineage. Great-great-grandmother Nampeyo was a famous Hopi potter who restored the art of Hopi pottery-making. Nampeyo's granddaughter and Dan Namingha's mother, Dextra Quotskuyva Nampeyo, crafted a pottery style that was more reflective of modern Hopi times. These role models, as well as the art and ideas the Namingas share in their latest exhibit express the Tewa trait of a willingness to experiment with new things, while protecting the sanctity of Hopi sacred images.

The public is invited to attend an exciting Southwestern summer event with the artists at the MNA on Saturday, June 16. This gala fundraising event to celebrate the opening of Elemental Forms includes a reception, dinner, exhibit preview, gallery sales, and a live auction of Namingha art. Tickets are $200 per person for the dinner, and $250 per person for the reception and dinner combined. Reservations are required. For further information, call Cassie Dakan at 928-774-5211, ext. 225.