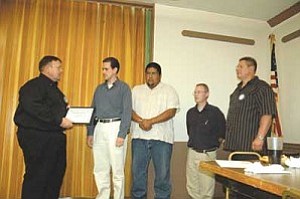 You can truly measure the success of an organization by the amount of people willing to come forward and nominate them for recognition. Every year the Rotary Club awards a citizen or organization of the year. This year, the organization with the most praise goes to the Winslow Ministerial Association.

The Winslow Ministerial Association had been involved in organizing a winter shelter around Winslow this past winter to offer a warm place to stay, primarily for inebriates out on the streets.

"With some pastors representing seven different churches and with 40 ­ 50 volunteers, we were able to offer a warm place to sleep with a blanket on the floor for those in need," Harris said. "And we are going to continue to do this."

The Ministerial Association came together to address what they have said is a serious problem in Winslow. Between the church organizers, they utilize church property as available to open its doors during the cold winter night hours.

"What started out at the beginning of the last winter with four or five people staying in the shelter, ended the winter with about 35 people regularly staying," Harris said.

Typically, to keep the shelter open, four volunteers would work overnight operating in shifts to keep an eye out on things. The pastors said they had to deal with a few instances of fights and severe intoxication that eventually involved police and paramedics.

"The emergency responders were very supportive of what we where doing and they had great response times," Harris said.

He said the churches and their members in Winslow are committed to this and that hopefully they could find a permanent building in the future to use for a winter shelter.

Actually, the night before the Winslow Ministerial Association was given this award for their work in sheltering people from the cold, the Winslow City Council unanimously approved the donation of three acres of land to be used for a detox facility in Winslow.

Winslow resident and volunteer John Larson, who has been promoting rehabilitation services in Winslow and Holbrook for years, told Council, "It is my intent and the Winslow Ministerial Association's intent that we try to marry a winter shelter somewhere with this detox center."

Two days after this was told to Council, it was so far decided between NARBHA, the city of Winslow and volunteers like Larson or the Winslow Ministerial Association that the winter shelter could be a mobile until that could be parked on the property of the proposed Winslow detox facility. Larson, Winslow Mayor Allan Affeldt and City of Winslow Liaison to the Hopi Tribe Peggy Adams, represented Winslow in attendance at these meetings to get the project for Winslow. If nothing is built by summer of 2008, the state funding will be lost.

The three acres of land Council gave for a permanent detox center is located north of the Winslow Crossing Apartments and east of the Winslow Indian Health Care Center. To show the City's support, Councilwoman Bumpus suggested that the City bring the utilities to the proposed detox center building to which Council agreed.

The city of Winslow plans to look for grants to build a block wall around the facility to preserve its privacy and help ensure that the detox center is a good neighbor.