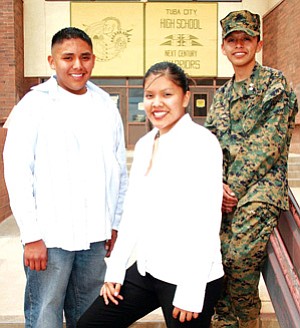 TUBA CITY-Only 1,000 students in the entire United States are selected each year for the honor of becoming a Gates Millenium scholar. Even fewer are selected from Native reservation schools. With 24 tribes in the state of Arizona, fewer than that make the final cut.

This year, three of Tuba City High School's finest made it past the grueling 36-page application process, scored high enough on their overall grade point averages and even more importantly, participated in enough community service and student awareness events to win a Bill and Melinda Gates Millenium Scholarship.

The Gates Millennium Scholars program was established in 1999 with a one billion dollar grant from the Bill and Melinda Gates Foundation which provides minority students who have shown high academic promise and represented their communities well with scholarships.

With the Gates funding, students are able to pursue advanced college degrees in the areas of education, engineering, library science, mathematics and public sciences-areas where minorities are greatly underrepresented.

The funding is geared toward providing seamless support for these high academic achievers from minority communities, meeting all needs that accompany college costs. Each Gates scholar receives money that is renewable so long as they maintain satisfactory grade point averages during college.

More than 10,000 Gates scholars have been funded since its inception, with a final graduation rate of 77.6 percent over five years.

DeJolie (Diné), daughter of Irene and Daniel DeJolie, was born in Shiprock, N.M. but credits her maternal upbringing to the community of Cow Springs. DeJolie is 18 years old, from the White Corn Zuni and Towering House People clans.

DeJolie has also been named a World Scholar athlete, and participated in the 2006 World Scholar Athletic Games in Rhode Island. She was the only Native American athlete to attend the Rhode Island event. She and her final teammates took the championship and she received the Most Valuable Player award as well.

DeJolie was thrilled to find she was a Gates Scholar, since her parents are also paying for two of her siblings to attend college. She said that the nine different essays she prepared for the Gates application were so varied she found it challenging and fun.

DeJolie is not the first in her family to go to college, which has helped her tremendously in the process. Her mother has a master's degree and her eldest sister recently earned her bachelor's degree in elementary education. DeJolie named her mother as her family academic mentor, since her mother was the oldest of 10 children and the only one in her family with an advanced college degree.

She also credits her basketball coach at TC High, James Roe with pushing her along, supporting and giving her advice when she needed it most and thinks if it were not for Roe, she might not have made it this far.

DeJolie would like to take a variety of classes when she gets to Northern Arizona University in the fall of 2007, looking to explore a bit before deciding on a final career goal.

Jordan Begay (Diné), son of Leta and Wilson Begay of Cowsprings, Arizona is 17 years of age and has a perfect GPA of 4.0. Begay is of the Bitter Water Clan born for Towering House People Clan. He is the middle child of five.

Begay gives credit for his high school academic success to teacher Kalen Smith, and counselor Karen Garcia of TC High for their unwavering support, noting in particular that Smith has inspired him to new academic heights, making him believe that he can accomplish anything.

When Begay was applying for the Gates money, he said he thought the essay was the most difficult, noting that each essay had to be so personal. He spent an average of three weeks alone on each section. Begay is the first in his family to attend college of any kind, but feels that his parents were instrumental in giving him the best foundation for the academic challenges ahead of him, particularly since his final goal is be an orthopedic surgeon.

Begay would like to attend the University of Arizona as a pre-med major with a concentration on political science. His long list of prior academic accomplishments include the National Honor Society; freshman, sophomore and junior Class Top Ten; Who's Who Among High School Students; U.S. Achievement Academy; Student Council vice president; 2004 San Diego University Upward Bound Graduate; and a HOBY World Leadership Conference participant.

Kevin Attikai (Diné), son of Ilene and Gerlad Attikai is a Tuba City native and is 18 years of age. With a final GPA of 3.8, Attikai is also one of TC High's Top Ten seniors, and will also be the first in his family to attend college.

Attikai says with his large family and family living costs, he is certain that all of his Gates money will be spent wisely and thoroughly on his college career, citing that his entire family have been his mentors, cheering him on and understanding how important the Gates money will be to get him to his end life goal.

He also said that his USMCR instructor, First Sgt. Kenneth Bustamante, was instrumental in letting him know how well he could do and that he must finish the application to the Gates scholarship to maximize his future chances to get financial support to fulfill his dreams.

Attikai hasn't decided on a final career yet, but will attend Northern Arizona University in fall 2007 and feels especially grateful to have won such a prestigious scholarship knowing what the odds were in obtaining such an award.

Attikai said, "I wanted to give the Gates Scholarship application a shot, because as wild as it would be to win, I figured anything this worthwhile is worth working for."