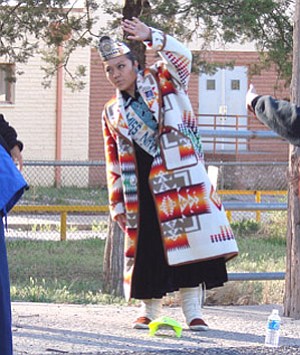 Miss Navajo Nation Jocelyn Billy joins in the stretch before heading out on the Journey to Wellness XI beginning at the old hospital in Fort Defiance on May 3 (Courtesy photo).

Supervisor White, who has been encouraging District II employees to lead healthy lifestyles, was accompanied by a team of ten district employees. The employees each completed at least six miles on the journey and helped to serve the first day's lunch, which was provided by District II.

The journey - a total of 35 miles over two days - began at the old Fort Defiance hospital with the participants being led through a series of stretches to prepare them. The route went through Blue Canyon Road to Sawmill and finally onto Fluted Rock Road where participants camped overnight. The mileage for the first day was 21.1 miles.

On the second day, the walkers continued on Fluted Rock Road to Black Soil Road and arrived at Kin dah Lichi Olta in Kinlichee, completing nearly 14 miles. The walk was led by the Fort Defiance Veterans Organization through the two-day event.

Safety procedures were in place during the entire walk. Breaks were provided approximately every three miles with water and energy snacks. Vans kept pace with the walkers for those that got tired along the way. Monitors accompanied the walkers throughout the route with radios to keep in contact with organizers and drivers.

Shirley Nelson, health promotion coordinator at Fort Defiance Indian Hospital, said that the event is a kick off for summer activities, including the upcoming Just Move It series where walking/running events are held at chapters throughout the service area.

"We use this to promote walking and getting people involved with the community," Nelson said. She said that approximately 300-400 people participated during this year's walk.

Community involvement was the reason that this year the different service units each held their own walks rather than one walk across the Navajo Nation as was done in the past. Similar walks were also being held by Tuba City, Winslow, Chinle and Shiprock Service Units at the same time as the two-day walk in Fort Defiance.

Participants ranged from the very young to the elderly. School buses brought children in to walk the last leg of the journey, and many of those who walked the most mileage were elderly.

Supervisor White said that he and his staff participated because the walk was a good way to promote healthy living for all Navajo people.

"This walk is very beneficial for the Diné people," Supervisor White said citing high rates of high blood pressure and diabetes among Navajo people. "We need to all go out and exercise to improve our health. I urge the Navajo people to make use of these resources that are available."

For the District II employees, walking in the event prompted many of them to think about exercising more and eating healthier. The mechanics, equipment operators, transport drivers and administrative staff all participated.

"You don't need to be a top athlete. You just need desire in your heart," Jason Yazzie, road inspector for District II, said following the event. "It was a lot of fun."

The other workers also had fun participating.

"The walk was intense and the view was magnificent," Truman Chee, shop supervisor for District II, said. "The Fort Defiance shop crew walked six miles and enjoyed every mile."