"Silence is a Weapon" - CD Review 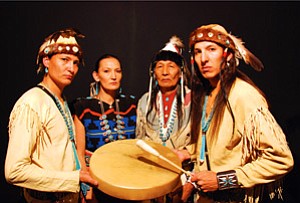 Silence is a Weapon-this powerful CD serves as a complex portrait of the public and private lives of Jeneda, Klee and Clayson Benally, who together, form the band Blackfire. Anyone privileged to know this trio personally know how carefully these young people nurture not only their music, but their Navajo culture. They are far more than just Navajo musicians-they are warriors for environmental justice, teachers of children, mother, husband, and the children of a medicine man. Each is a force within him or herself, living lives so full there is very little time for personal relaxation.

Those who know them only as musicians cannot ignore their intensity-that same intensity burns hot in their new CD.

Even the packaging and disc art of "Silence is a Weapon" serves as a herald of things that are and that could be.

Those possibilities are not pretty, but balanced in the Beauty Way of the Navajo people. There is hope. Images of the band members in traditional Navajo clothing as well as in what one might call activist couture screams the duality that Native American youth face every day of their lives. There are images of megaphones, feathers, drums, corn and utility poles, desert scenes of hogans, warriors riding by buildings and automobiles seemingly destroyed by nuclear war-the colors are radioactive hot, images viewed through what might be clouds of nuclear flash.

"I'm an Indian, I'm an alien, I'm a stranger in this town. All the White men's roads lead upward, all ours lead us down..."

Klee's deep, resonant voice leaves no doubt as to the anger and hopelessness many Native American people face, however there is powerful hope there as well.

"For the red man and the black man, the yellow, white and brown, we walk this road together and this road is freedom bound."

Blackfire challenges us not only to end the war in Iraq, but all wars. "We just treat the symptoms, but what about the source?"

"Overwhelming" can only describe the condition facing the Earth Mother-and the anger from deception. "It's getting hotter, harder to breathe, why should I calm down? I know I've been deceived."

Another song, "The Possibilities," asks, "How did we let it get this far."

The disc can only be described as angry and demanding-not unlike other forms of music such as rap-but there is no casual reference to killing, no disrespect of women, no foul language or description of raw sex. "Silence is a Weapon" is far more primal, concerned with the very basic truth that without a healthy environment, there is no life.

And finally, in addition to a veneer painted by their hard work on sacred site and environmental issues, Blackfire has produced some very good rock music. That fact should not be ignored.

These are not actual ceremonial songs as those are not to be used for public entertainment. Some are old social songs, for hoop and circle dances, others are riding songs, sung by the People as they traveled the vast landscapes on horseback.

There are intertribal songs, learned at gatherings and passed on through powwow. Also included is the American Indian Movement Song, described as a song of struggle, celebration and honoring.

Indeed, silence is a weapon. Any person or group that has been ignored-their concerns unanswered by those of higher authority, whose safety and well-being lie in the hands of government, corporation or even family-can attest to the truth in these four words.

They speak volumes to anyone who has ever had to hold an ugly little family secret, or whose parent refuses to speak up in his or her defense. In the case of injustice, whether that be murders on reservation lands where mothers, fathers, husband, wives and children see the loss of their loved ones without justice, or environmental and cultural genocide where those cloaked in the robes of trust responsibility watch silently as people die one by one, silence is as dangerous as any murder weapon. The concept of silence as a deadly force is understood only by those who have been victims.

Back to the strange duality of these times-music is also a weapon, and wielded by the band Blackfire, it is a weapon demanding respect, environmental and cultural justice and the right to raise ones children and grandchildren in a healthy, sustainable world.

Silence is a Weapon is available at Cool Runnings in Window Rock, Winter Sun and Hastings in Flagstaff and on the internet at www.blackfire.net and on iTunes.