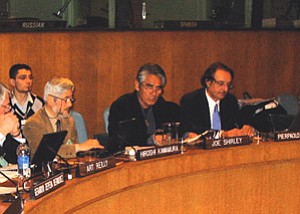 Joe Shirley Jr. (center) chairs a session of the Seventh Info-Poverty World Conference at the United Nations in New York City, April 19. Shirley spoke of the progress the Navajo Nation has made to bring Internet technology and communications to its people (Photo by George Hardeen/OPVP).

Speaking before the 2007 Info-poverty World Conference at the United Nations on April 26 and 27, he said the Navajo Nation can assist to preserve languages, cultures and ways of life while providing access to education and economic development online.

Shirley said that in 2005 when the UN learned that the Navajo Nation had created one of the largest wireless networks in the world through satellite technology, it asked if it could share that knowledge with the rest of the world.

He said that led to the Nation joining the International Telecommunications Union and the Observatory for Cultural and Audiovisual Communication, or OCCAM, and creating plans to open an international office for indigenous nations in Window Rock later this year.

He said all 110 Navajo Nation communities have wireless Internet access, and every Navajo who wants an e-mail address can have one.

"There is not another Native American tribe or organization in the world that is coming close to taking the kind of leadership position that the Navajo Nation is," said Ernest Franklin, executive director of the Navajo Nation Telecommunications Regulatory Commission, who attended with Shirley.

"This is going to bring jobs and economic opportunity to the Navajo Nation while helping Indigenous people around the world," he said.

Already there are programs in place on Navajoland that allow Navajos to do business online, complete their educations, or become certified in software applications and how to use computers and the Internet.

"Education, as we see it, as an Indigenous nation, is one of the ways to get back to standing on our own two feet, sustaining ourselves as individuals, as families, as communities, and, ultimately, as a nation," Shirley said.

Each Navajo chapter has its own website, all three branches of Navajo Nation government are online and can communicate with constituents through e-mail. Distance learning is taking hold, and even Navajo elderly are communicating with their grandchildren in distant locations, colleges, or the military via e-mail, he said.

He said the Navajo Nation desires to be a world player because it is trying to share its knowledge with other countries and Indigenous nations.

On April 26, the President chaired a conference session titled "New Solutions for the Needs of Disadvantaged Communities."

Fred Tipson, director for International Development Policy for Microsoft, said the impact of ICTs on economic growth and productivity has been so pervasive and rapid that the world is only just beginning to realize its extent and nature.

"It is no exaggeration to say that the United States and other developed countries have entered an era of digital prosperity, and of even greater digital potential, that truly justifies the term revolutionary," he said.

He said Microsoft recently announced that over the next two years it would expand its Microsoft Innovation Centers to 200 centers, and increase from 60 to 85 countries.

In a message to the conference, UN Secretary, General Ban Ki-Moon said it was important that participants work with governments, civil society, the business sector, and academia in order to empower the world.

"Information and communication technologies have a central role to play in the quest for development, dignity and peace," he said. "The international consensus on this point is clear. We saw it with the 2000 Millennium Summit and at the 2005 World Summit."

The two phases of the World Summit on the Information Society - Geneva in 2003 and Tunis in 2005 - had Navajo participation and established broad policy consensus on the principles of the emerging information society.