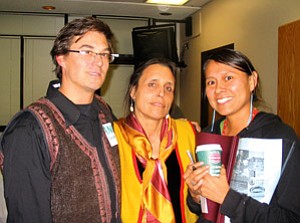 Winona LaDuke (center) of Honor the Earth, poses with Andy Bessler (left) of the Flagstaff Sierra Club and Wahleah Johns of the Black Mesa Water Coalition at a JTC meeting earlier this year (Photo courtesy of Just Trasition Coalition).

LEUPP-Leupp Chapter officials and chapter members received a request for a resolution supporting the Just Transition Coalition's proposal that includes plans to bring economic development and energy to the Navajo and Hopi reservations.

Andy Bessler of the Sierra Club and Enai Begaye of the Black Mesa Water Coalition traveled to Leupp on May 5 to explain the details of the proposal, which is based on what environmental groups-both Native and non-Native-see as a fair closure to a painful chapter of Navajo and Hopi history.

"When Mohave closed, owners get to cash in on millions of dollars of pollution credits," Bessler explained on May 10. "The Coalition is asking the government in California to give those dollars to Navajo and Hopi communities for investment in wind and solar energy projects. This will bring jobs, economic development and renewable energy to tribes, while California residents would get the electricity [that is] produced."

Bessler explained the benefits to chapter members, pointing out that the renewable energy components of the proposal would use virtually no water, and will not pollute the land.

"California has passed a great many laws concerning renewable energy and environmental issues," Bessler said. "If they share this money with us, they will want to see it spent on wind and solar power."

Though many people hope that the Mohave issue is closed, Bessler reported that in a recent conversation with representatives from the Office of Surface Mining (OSM) he learned that work on the Environmental Impact Statement (EIS) is continuing, and is expected to be released in July.

"Southern Cal Edison is looking for new buyers for the Mohave Generating Station, and if they can't sell it, they will no longer pay for the EIS," Bessler said. "In that case, Peabody Energy will pay to have the EIS process continue."

Amos Johnson is no stranger to aquifer issues. As delegate to the Black Mesa and Forest Lake Chapters, he and fellow chapter members have experienced firsthand the effects of N-aquifer water use for coal slurry by Peabody Coal Company.

I think [the Just Transition proposal] is a good idea. I support it mainly because the credits and allowances [from the plant closure] should benefit the Navajo as well as the Hopi people," Johnson said. "It's our coal and our water, and we have seen little return on these resources. The royalty rates we've received are not at fair market value."

Johnson said that the Navajo Nation should develop a feasibility plan concerning solar and wind power in order to protect the environment.

"Water is included in our relationship to each other and the environment," Johnson added. "We are always talking about clans-and a lot of the clans are water clans. If the water is gone, we are no longer in existence. We must protect our resources for future generations and for our clanship."

Chapter Delegate Thomas Walker Jr. noted that the Just Transition proposal could be an opportunity if Leupp Chapter had achieved Local Governance status.

"With certification, we could have a deciding role," Walker said. "That status is needed to give the chapter the ability to create formal policies on land and resource use. I urge the chapter to accelerate that effort. Once we are certified, that would bring us a step [closer] on a lot of decision making within the chapter, which could include the grassroots people as well. Right now, it's the central government that sees the Just Transition proposal as a top money-making effort, not Leupp Chapter."

Members of the C-Aquifer for Diné (CAFD) group discussed various concerns and issues, including a proposal for individual wells for families in the Canyon Diablo area.

Chapter President Thomas Cody told group members that individual wells were not feasible, as Indian Health Services would not provide individual wells. After listening to various speakers, Cody urged members of the group to put a plan together that the chapter could include in its water plan.

"I want one of you to sit on Andy Bessler's Just Transition task force. I'll attend those meetings and we'll all be on the same page," Cody said.

Cody also encouraged the C-Aquifer for Diné group to attend the Community Land Use Plan (CLUP) meetings and that at their request, the last CLUP meeting was held on a Saturday, however none of the group members had attended.

Calvin Johnson, President of the CAFD group said that meetings were held without his group receiving notification.

Council Delegate Leonard Chee responded to Johnson's allegation that he and other chapter officials received $500 for attending meetings.

"You receive $500 per meeting-give them [chapter members] time to voice their own issues from their own voices."

After the meeting, Cody admitted that there are outside communities looking to Leupp for water, including a request to provide water for the coming Dilcon Health Center. Allegations voiced during the meeting that Winslow would be closing the Indian Health Center are rumors, Cody added.

"I want to know who will really benefit from this plan," Cody said. "The Just Transition Coalition needs to provide details on how my people will benefit."

When asked whether he believed that the California entities would go for the proposal, Bessler, for one, is hopeful.

"As Martin Luther King said, 'The moral arc of the universe is long, but it bends towards justice,'" Bessler said. "The decades of mining at Black Mesa and the drawdown of the N-Aquifer have been an historical injustice to Navajo and Hopi people and the [Just Transition] Coalition hopes that this plan will help bring healing through wind and solar energy development that does not use groundwater, pollute the air and allow land users to keep using the land.

"Currently, we are in mediation and have been assigned a mediator by the California Public Utilities Commission (CPUC)," Bessler continued. "Parties in the mediation include the Coalition, the Navajo and Hopi Tribes, California ratepayer groups and the primary owner of Mohave-Southern California Edison. Based on how the CPUC has taken our plan and moved it along, I am confident that the CPUC will direct these funds-estimated at around $20 million per year until 2026-toward tribal communities. Once we work out the details through mediation, CPUC will either approve or deny the plan, which we feel will be approved."

Rosita Ann Kelly, chapter secretary/treasurer, noted that since studies have shown that the Leupp/Canyon Diablo has water, other communities have been asking for help.

"My issue is that we wanted the water here," Kelly said. "What about the people here? I want to see our people get served here before water is sent out. We're trying to work on this the best we can."