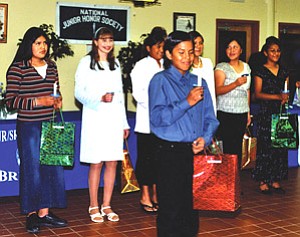 The newly inducted members consisted of students from the seventh, eighth and ninth grades.

NJHS Advisor Rita Keith said that this year the members did some fundraising, helped out the National Honor Society with a food drive and the installation of a memorial plaque.

Next year the NJHS members will be reading to children at the Hopi Tribe's daycare in Kykotsmovi.

They will also do some play reading to local elementary schools as well as food drives, fundraisers for charity, trash collection and they are going to start a plastic bottle recycling project.