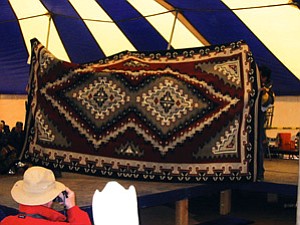 An intricately detailed Navajo rug so large that it took three people to hold it up (Photo by R.C. Alexander).

GANADO-Sponsored by the Friends of Hubbell Historic Trading Post, R.B. Burnham and Co. Native Auctions warmed up the giant blue and white tent for hundreds of potential Navajo rug buyers at the event held May 5. Hundreds of rugs went on the auction block, many with the weavers in attendance, willing to be photographed with the purchases. Although there were a few other items such as baskets, pottery, paintings, stone carvings, flutes and pipes, about 90 percent of the auction items were rugs from weavers of all ages.

Bruce Burnham and Hank Blair, both experts in their field and coming from generations of reservation traders, shared their wealth of knowledge; they know most of the contemporary weavers personally. Their humor was appreciated by the crowd, as they often reminded novice bidders not to bid against themselves. As hail, snow and rain took their turns pelting the giant tent set up on the Hubbell compound, Burnham mentioned that the unusual amount of great storm pattern rugs in the auction were obviously doing their job. Some of the bidders purchased rugs early just to sit wrapped up in them during the cold storms that were present all afternoon.

Before the auction started, several hours were devoted to allowing potential bidders to review the consignments and ask questions of Burnham and Blair. Minimum bids started very modesty-some as low as $30-50 for some work and higher for museum quality pieces. Very large rugs sold in the thousands; however, prices were lower than collectors would pay in a typical retail market. Many of the larger beautiful rugs could be purchased for $300 to $1,000. Bidders purchased multiple items for their own collections or to stock their Native art galleries in other states.

Native vendors provided fry bread, mutton stew, drinks and Navajo tacos. Crafters set up tables around the perimeter of the tent selling their wares. The historic Hubbell Trading Post was open for the visiting bidders. One can still buy a soda or candy in the old trading post just like people have been doing for more than 100 years. The Hubbell compound buzzed with energy and activity during the auction just as it did in the early times when Navajo families arrived in wagons for sheep dips, shopping, and catching up on news.

For more information about R.B. Burnham and Co. auctions, call 928-688-2777. The next Friends of Hubbell rug auction is scheduled for August 25.

For more information about Friends of Hubbell simply search the internet for their name.

For more information about the historic Hubbell Trading Post search the internet, call 928-755-3254 or email Hubbell@wnpa.org.