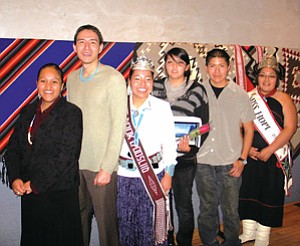 FLAGSTAFF-Native American students from throughout the Flagstaff Unified School District were honored on two separate days at the Dubois Center on the Northern Arizona University Campus.

Students with a grade point average of 3.0 or above consistently for three consecutive grading periods, or approximately 3/4 of the school year were honored.

According to Josie Begay-James, Native American counselor at Flagstaff High School, Native American students make up about 25 percent of the student body district-wide. The awards ceremony has been an annual event since the early 1980s.