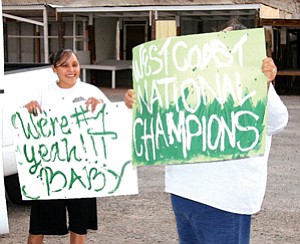 Community members and staff of Tuba City High School met the new 2007 champions at the junction of Highways 89A and 160 with hand painted signs, hugging and congratulatory applause upon their arrival back to Tuba City (Photo by Byron Poocha).

Competing against 58 schools from areas as far away as Guam, Japan and Hawaii, and against schools with much larger ROTC programs, TC High sailed past its competitors to take drill team honors. They also made their way through the Arizona State competition for Marksmanship Championship.

Under the direct instruction, guidance and supervision of 1st Sgt. Kenneth Bustamante and Gunnery Sgt. Timothy Shaner, the TC High program has racked up more than 184 trophies, which line the entire west wing hallway of the TC High Warrior Pavilion.

This new ranking gives TC High its highest coveted award-the honor of being named a Naval Honor School-which comes with the privilege of awarding three graduating seniors the opportunity to attend either the Air Force, the Naval Academy or West Point.

To prepare for these drill competitions, the MJROTC students practiced diligently throughout the winter months, including early practices before school. Drill practices were conducted in the cold, during weather chilly enough to make hands and ears red and cause blisters on their feet from the sharp, snappy turns made in high heels.

Gunney Sgt. Shaner stated, "The administration of TCUSD has been completely supportive of our program. The students understand that we are not just competing to participate, but we are competing to win. The best part of this instruction and training is that these amazing students are just reaching their peak. I am so proud of them. They represent the best of the best in Tuba City and Moencopi."

First Sgt. Ken Bustamante added, "I came...to Tuba City High School because of the professionalism I could see in Gunney Shaner, whom I had been formally competing against for the past 10 years. Tuba City is the heart of Native America, and the heart of the reservation, and what it took my last school to do in three years, it's only taken Tuba City about a year. We are competing against much larger schools, schools that have populations to make them 4A and 5A, but this has not deterred our TC high students. Our cadets at TC High are setting the national example. They are indeed exceptional."

With so much attention and pride in their TC High students, Bustamante was able to gather monetary support for his students to compete, including donations from Tuba City Chapter House who donated $1,000, Page-Lake Powell Regional Community Foundation an affiliate of the Arizona Community Foundation who donated $4,000 and Hopi Tribe's Moencopi Village donating support as well.

"It was wonderful to be able to get the local and outreaching community support to help get us to this competition because it becomes somewhat stressful to try to raise enough money to go, but when they say it takes a whole community to raise a child, well that is really true," Bustamante said.

Returning from the competition, Tuba City community members, parents and staff supporters met the bus at the junction of 89A and Highway 160 to welcome the team home. Lots of hand-painted signs and cheering were accompanied with lots of hugging and smiling.