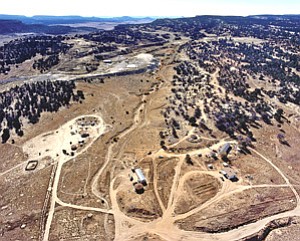 On May 1, the U.S. EPA announced it would work with the Navajo EPA to clean up contaminated soil around five Navajo residences in close proximity to the mine site formerly operated by United Nuclear Corp.

The phase one, $2.1 million project was scheduled to begin May 7. The U.S. EPA will remove 5,300 cubic feet of soil to a depth of six inches around the five home sites. The entire 125-acre site consists of two underground mines, several vent holes, buried waste, unlined surface impoundments, sand fill areas, and a pile of waste uranium mined material. For 24 years, contaminated water discharged into the arroyo that runs past several homes. Contaminated soil was also spread by the wind and water run-off.

In 2003, the Navajo EPA determined that the land area was actually Navajo trust land rather than private property, as was believed by United Nuclear Corp. and the State of New Mexico.

To minimize exposure to contaminants, the affected families will be temporarily housed in Gallup hotels for the two weeks it will take to remove radium-contaminated soil from land surrounding their homes. Radium is a known carcinogen, and the levels at the homes require excavation and removal of the surface soil.

President Shirley said the Navajo EPA staff worked persistently since 2003 to convince the federal EPA of the need to clean up the site. The Navajo EPA is now seeking federal resources to have the land and home sites restored to harmony in the traditional Navajo way as well. Shirley also credited the staff at the Navajo EPA for persuading the federal EPA of the need for cultural understanding and sensitivity in addition to the public health concern about exposure to radioactive contaminants.

"Without our staff working, we wouldn't have gotten this far," he said. "They pushed to shed light on herbs, beliefs, culture and our medicine people. It's always good to be working together. That's the way it should be all along. The federal EPA has turned around and is coming in and helping us. The U.S. government is showing the world that they really do have a heart. We're just very appreciative of that."

"As Navajo people, we're the ones who know and understand our cultural ways best," he added. "It makes sense that we want to use our own staff who grow up with this knowledge."

Stephen B. Etsitty, Navajo EPA executive director, said the U.S. EPA reached agreements with United Nuclear Corp. and General Electric to clean up the site and to transport the collected soil off the Navajo Nation. He said his office has identified this as one of the most important public health issues of the Navajo Nation.

In a news release issued Tuesday, U.S. EPA Superfund Director Keith Takata said removing radium-contaminated soil from around homes would prevent direct human contact and make the area safe for people and livestock. The nearest home to the waste pile is 786 feet.

"The U.S. EPA and the Navajo Nation EPA are working together to ensure that personal and cultural needs of the affected residents are properly addressed," he said.