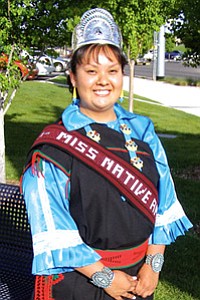 ALBUQUERQUE - New Mexico State University's Miss Native American 2007-08 had the experience of a lifetime during the Gathering of Nations Pow Wow in Albuquerque on April 27-28 as she represented her family, pueblo and university in the event's grand entry ceremony.

"It was amazing being on the floor with all of the dancers and people," said Yvette Aguilar, who stepped to the beat of the drums shoulder-to-shoulder with more than 350 dancers during the annual event held at the University of New Mexico's Pit.

Dressed in her pueblo's traditional dress and wearing her crown and title sash, Aguilar joined other princesses representing their schools from around the country in the opening ceremony of the two nights of dance competition.

"It was fun walking around the Indian Trader's Market, talking to people and meeting other students, especially the other princesses. They are so outgoing. They are my role models now that I'm a role model to others," said the self-determined "shy" young lady.

This was the second time she had attended the Gathering, the first being while in elementary school. "I never thought I'd participate in the Gathering of Nations, let alone represent my university as Miss Native American," she said. "I didn't expect to be chosen Miss Native American during the contest," said the Santo Domingo Pueblo member. The contest, an annual event, was held during American Indian Week in March. "I decided if you don't try something, you can't find out the fun of it."

"There really are not that many Native American students here at NMSU. I think it is because they don't know what it's all about," said Aguilar, the daughter of Nestor and Margaret Lovato of Santo Domingo. "If it hadn't been for a student recruiter talking to me, and getting me interested in going to college, I wouldn't be here now."

Of the student support offered by the American Indian Program, Aguilar said the peer mentor program is awesome. "As a freshman or transfer student the program hooks you up with someone who is in your college who helps you academically and socially by exposing you to various resources on campus," she said.