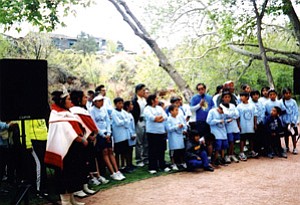 "Askqali" and "Quaqua," which both mean "thank you" in the Hopi language for the female and male, were expressed each time a runner finished her or his leg of run. All runners carried and relayed either the gourd of water, the ear of corn, or the planting stick from the beginning of the race to the end. This signified the sacredness of water.

Water is the essence of our daily lives, art and ceremonies. Water is the main ingredient and should always be respected. The Hopi, who have inhabited the lands of northern Arizona for over a millennium are not only the oldest dwellers, but they are the true stewards of the land and have once again proven their ancient running skills, planting skills, wisdom, religion and much more on behalf of our water.

Before daylight, Hopi runners, young and old, female and male, began the two-day trip with the children in the lead in the beginning and end of the run. Prayers for all the runners and for all humankind began as elders sprinkled cornmeal in the direction of their path toward the San Francisco Peaks. On the first day, the runners made their way through Sand Springs, Wupatki and ended in Flagstaff for the day. The following day the runners started on the road to Lake Mary and on down through Schnebly Hill Road to Sedona. Many relatives, well wishers and guests welcomed the Hopi runners with cheers, applause and gratitude.

Other events included a Heritage Planting Ceremony at Canyon Moon Ranch, a Twilight Water Concert by William Eaton, a Hopi art market, a "Future of Water" student forum and a universal friendship dance and potluck as well as a viewing of the "Hopi to Mexico Rim" documentary. This run, held in March of 2006, was 2,000 miles long. The runners ran to the Fourth World Water Forum in Mexico City, Mexico.