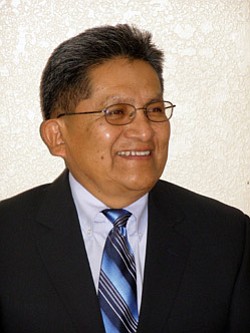 KYKOTSMOVI (March 28 2007)-The Hopi Tribe is once again without a Tribal Chairman. Just days after being inaugurated as the new Chairman, Ben Nuvamsa has been officially removed from office by the Hopi Tribal Council.

The Council discussed an action item and resolution brought forth by Harry Nutumya and Caleb Johnson during a second quarter session held on March 27. The action item disputed Nuvamsa's residency status, which was first brought into question by all of his opponents following the special primary election on Jan. 24. At that time, the Hopi Election Board held that Nuvamsa met the residency requirements by producing a series of documents that verified his residency.

Both Nutumya and Johnson ran against Nuvamsa during the primary election. After Johnson was elimated, Nutumya moved on to the general election on Feb. 7 and lost to Nuvamsa by 78 votes.

Nuvamsa's status as a Hopi resident was an issue of controversy for some time because many Hopis, including Nutumya and Johnson, believed he did not physically reside on the Hopi Reservation for at least two years as mandated by the Hopi Tribal Constitution.

According to a tribal council report, the action item called for the Council to nullify the election results due to Nuvamsa's questionable residency status. The action item alleged that a number of "Hopi-Tewa constituents" believed Nuvamsa did not meet the specified residency requirement (physically living at Hopi for two years) to run for Hopi Tribal Chairman.

The Council eventually voted 10 to 8 in favor of declaring the results of both the primary and general elections null and void, thereby compelling Nuvamsa's removal from office.

The Hopi Tribal Council was scheduled to meet in a special session on March 28 to determine the validity of documents signed by Nuvamsa during the three weeks that he held the office of Chairman, as well as discussing the possibility of holding another special election.